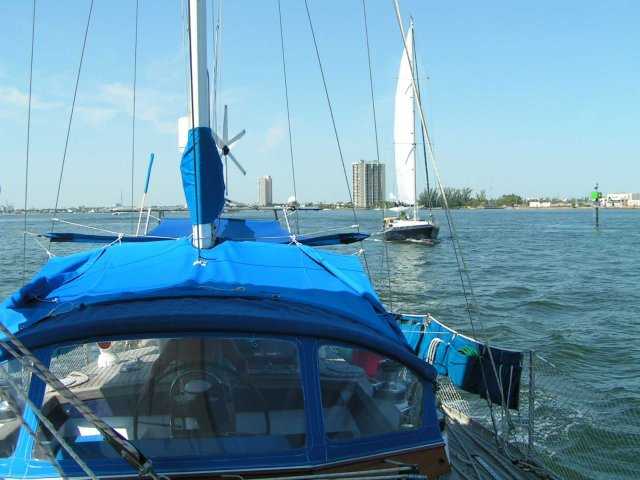 It was with mixed feelings that we departed the USA and West Palm Beach. Not only had we seen so many good friends, Andy, Chris, Darlene, Jim, and Kim just to name a few. We were lucky to be moored on a wonderful dock owned by Jim Collins and old friend (click here to see his dock) We were, however happy to be underway again and especially so since the onset of hurricane season had already happened and we wanted to be out of the path of any of those. To all our friends we miss you and look forward to our next visit. We left the dock on Friday night to get over the shallow patch, and then anchored out in deeper water. Saturday was Darlenes birthday and we were joined at anchor by her and Kim aboard "Cool Change". We had a lovely last supper with them, and on Saturday morning we motorsailed out of the Lake Worth Inlet, together. Cool Change (above, just behind us) was soon to turn back home while we made our way across the Gulf Stream. 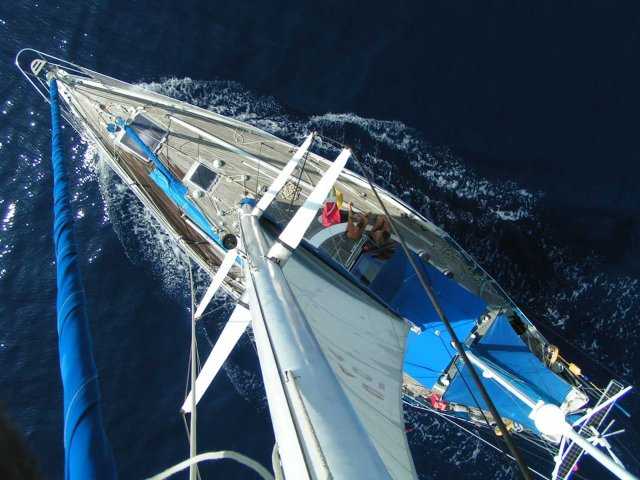 Our strategy was to make as much Easting as possible before turning South toward the Windward Passage. On our first night out, we noticed that the Masthead Tricolour light had blown, so in the morning I went up to change it. While there I took some photos while we motorsailed in an unusual calm that gave us time to make a few hundred miles East. 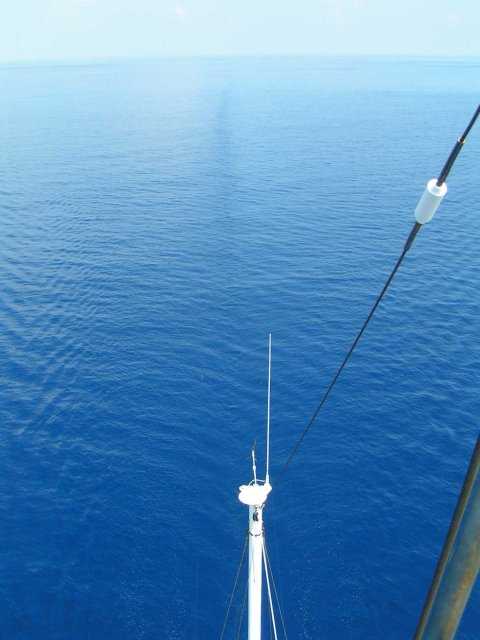 Our wake, doing about 5 knots motorsailing. 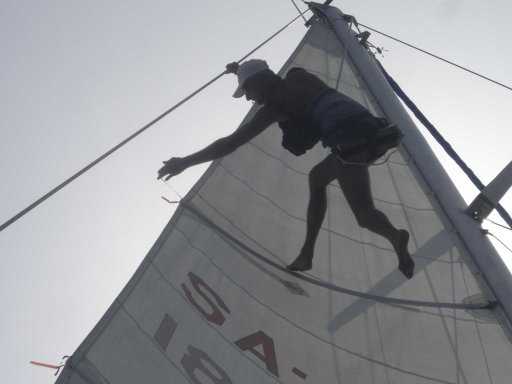 You're supposed to go a little faster when the trailing edge telltales are streaming aft. Well I made them stream aft but we did not go any faster. In truth, I was checking the sail for chafe and repairs. 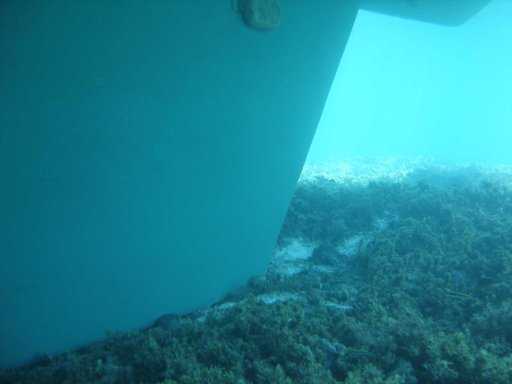 ...Then we had a blue Monday. This photo is Gilana's beautiful keel hard aground on a reef. Here is the story, the wind had picked up out of the East, we could not yet sail South because the island of Eluthera was in the way. So we decided to sneak through "Current Cut" and motor through the lee of Eluthera to appear at the northern end of the Exuma Sound, so that when the expected southerlies arrived we could make more easting. It was a stupid decision in retrospect, we had not planned to come this way and did not know the secrets of getting through Current Cut. The result was we went hard aground onto a reef and had to sit there for 12 hours to wait for the next high tide to float us off. It was a scary time with Gilana heeled way over at the low ebb, and in the frenzied activity of trying to get ourselves off, we burnt out the windlass motor and I broke a toe by kicking something on deck. 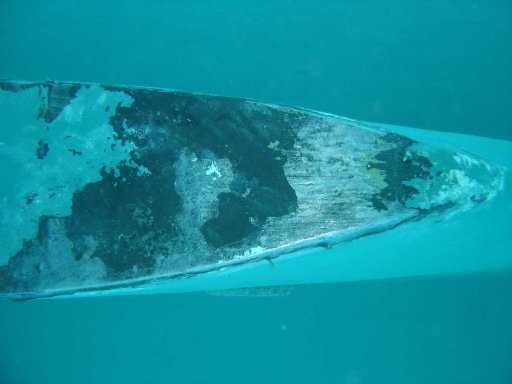 The only hull damage was to the paint, that we had just done in Venezuela. Fortunately Gilana has a 25mm (one inch) thick steel keel shoe, backed by 6000 Kg of poured lead. If we had been 2 metres to port, we would not have grounded, but, probably would have run aground elsewhere more difficult to get off. 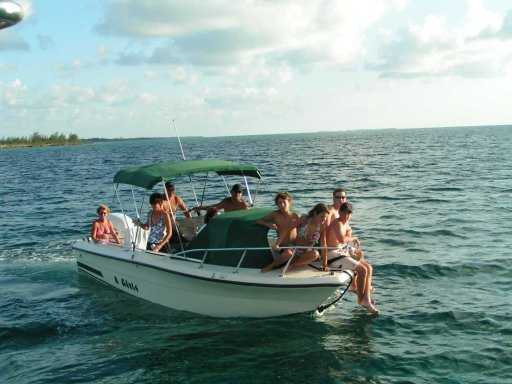 With the help of Capt. John, of "Four Girls" we were able to recover our anchors, and retrace our steps to a safe anchorage West of Egg Island, and make repairs. Thanks again John for your help. 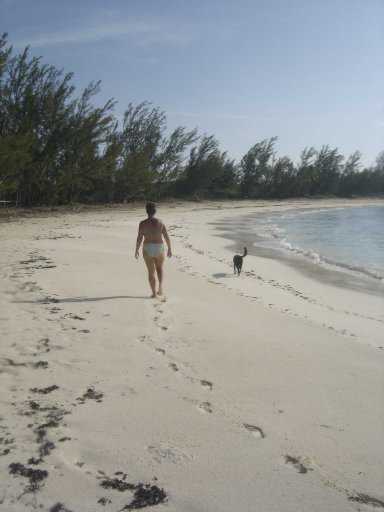 By now the Easterly winds had started blowing in a squally 15 to 30 knots, and we had no option but to trim the paint flakes on the keel, snorkel, and wait for the Southerly shift in the wind. Jack enjoyed not having to pee on board. 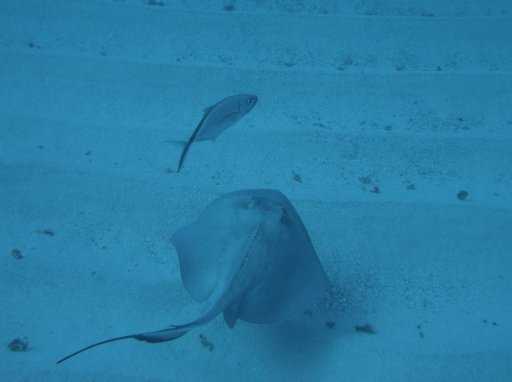 Liz took the opportunity to practise her underwater photography. Here a Blue Runner or Bar Jack, shadows a Stingray. 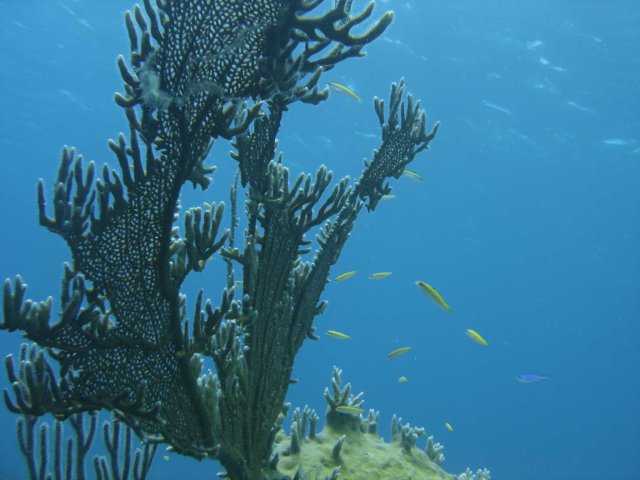 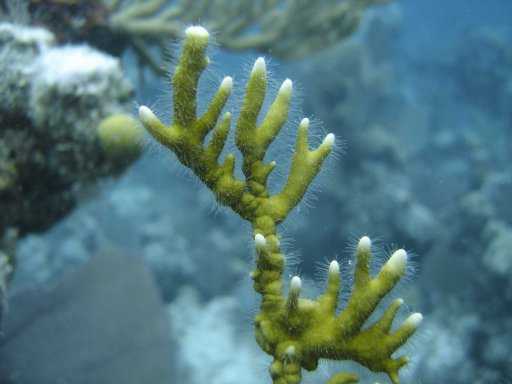 It was full moon and all the coral was spawning. 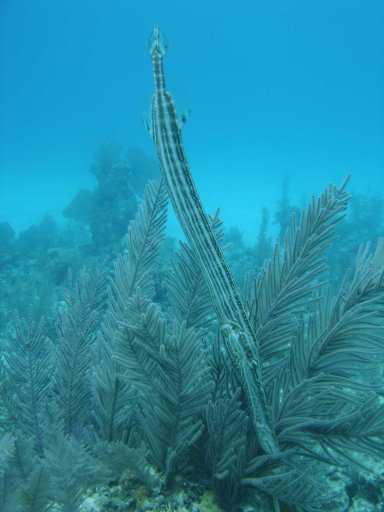 A Trumpetfish, almost motionless, drifts to and fro with the fan behind it. 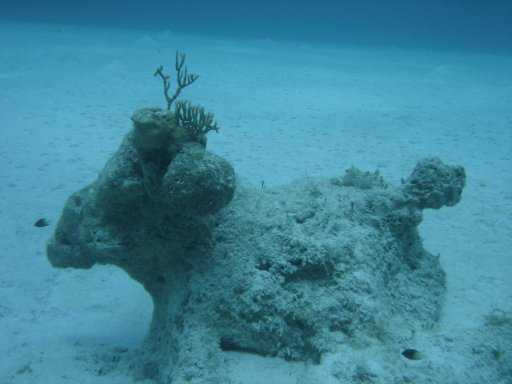 This little coral head looked just like a Goat from some angles. 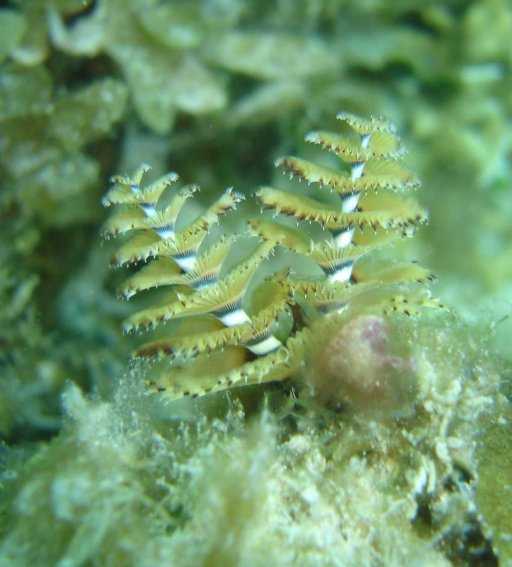 Christmas Tree Worm. The following Saturday the wind changed to the Southeast, and we were on our way again. 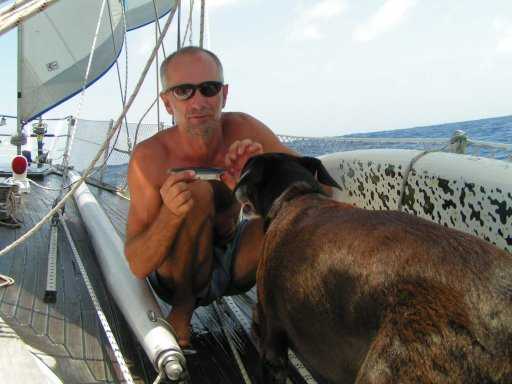 Sailing once again we passed through the Windward Passage, and into the Caribbean Sea. The smells of poverty from Haiti far behind us we were in good winds and making good time to Columbia. As always, Jack was up early to search for Flying Fish that had landed during the night. He is no longer able to digest the pectoral fins, so I partially fillet them for him now.