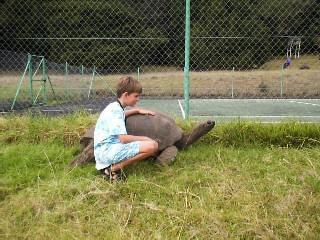 Our first impresion of St. Helena was a little bit of desert sticking up in the middle of the Atlantic ocean. The Island is best known because it was where Napoleon Bonaparte was imprisoned, and died.

What many people dont know is that he was allowed a complete French court in exile. He also had some giant tortoises as pets. When he died the tortoises were moved into the governers garden and there they still live today eating lettuce and other plants. I went to see these giant creatures, it was amazing to me how I was standing next to an animal that was alive over two hundred years ago.

We also found it fascinating to visit the archives where the records and details of his incarceration, death, and later exhumation and return to France were meticulously kept.

When we left St. Helena we were bound for Salvador on the east coast of Brazil.

The South Atlantic here is a lonely place. We didnt see another ship for seven days, then on the eighth, we saw two ships within half an hour, and then another seven days with nothing in sight.
Dad says that that point in the middle is where the two shipping routes cross. Miles from land we started seeing different birds, and the smell of land ahead was obvious.