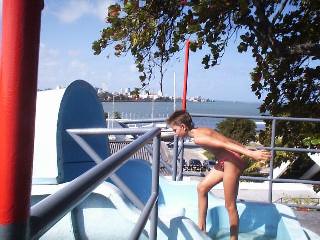 After dropping anchor dad and I went to this little yacht club called Pernumbuco Iate Clube. It is named after the river on which it is founded. It also had another name in earlier times. "Casa da Banhos" meaning house of baths.

It was a public bath house, although women were the main attraction, (for a fee).
This building is alone on the barrier reef, we tied up at the dingy dock and dripping with salt water went into the open patio restaurant. Dad had learnt some Portuguese and tried to ask where he could find Customs and Immigration. The owner of the bar, Christina came out of the kitchen with a nicely packed HOT meal. She refused to take any money and said that we could pay her in the morning once we had checked in and rested. Gratefully we accepted this and left.

I can't tell you every detail about our stay in Recife because we stayed there for three months.

The reason we stayed so long is that we entered a regatta that would take us to Fernando Do Noronha. We moved to the Cabanga Iate Clube Pernumbuco and it was huge and had a tennis court, soccer field, restaurant, concerts, t.v room, gym and last but not least a huge swimming pool, so big that kids learnt how to dingy sail in it.
The pool also had two huge water slides the kind that you find in water parks and we made some new friends.

There was a talk about the regatta we were entering that went on until two in the morning, we had to leave the marina at three am to catch the tide and at five there was a huge breakfast consisting of cake, fruit, biscuits, pies and all the other stuff you shouldn't have when you are about to set sail.

The start gun went off at about one thirty in the afternoon. We took four extra friends on the boat, there was mom, dad, granny, Jack the dog, myself not to mention Rafael, my dads new friend, his wife who was seven months pregnant, an eighteen year old girl who had no experince of sailing large yachts, but was a dinghy champion, and my favourite, a middle aged woman named Jean who I immediately clicked with.

She had grey hair and reminded me of my favourite teacher so that is probably why.
The race was 298 miles and took 48 hours 24 minutes. We were first in our class and there were 92 boats entered. The winner was a French racing Catamaran that was 50 feet wide. They took only 18 hours to complete the race, but they had no comfort, wearing wetsuits and eye protection all the way.