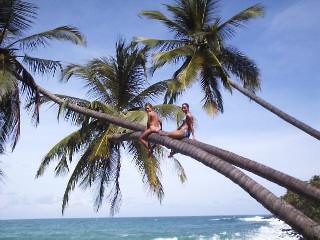 French Guyana is a French colony between Suriname and Brazil. We went to a group of three little islands called 'Illes de Salut ' the islands of greeting. They are individually called "Ille St Josef", "Ille Diable" and "Ille Royale" They are also known as "Devils Island" and were made famous by the book "Papillon" about an escapee.

In fact he was never imprisoned there, and his exploits were fictional but based upon the adventures of other prisoners. On the island the well worn stone path was built by the prisoners that were once on there.

The prisoners had no roofs on their cells so the guards could walk on the walls watching the prisoners, occasionally spitting at them and kicking rocks at them.

I found it shocking that the last beheading with the Guillotine was carried out as recently as 1974! When the prisons were abandoned and the last person had left the island the plants took over.

Because the ground in the prison was made out of cement, plants couldn't dig their roots directly into the soil, instead the roots twisted and turned along deserted corridors until the roots met soft soil.

When we left French Guyana for Trinidad we had the most comfortable sail, barreling along at six to seven knots we made good time. We played card games during the day while keeping watch. When we are underway we try not to waste electricity, so dinner has been made, eaten and packed away before the sun sets.

At that time, I was not yet old enough to stand watches alone for fear I would fall asleep. I did however stand a watch within a watch with mom. 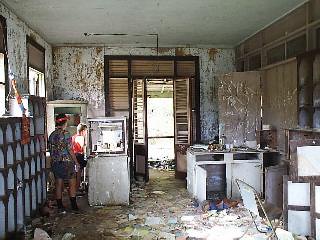 Early in the morning of the 26 November 1999 I was awakened by a strange but pleasant sound. I got up from my bunk and discovered that dad had found an English speaking radio station on FM, it was the first time I had heard Pan Music. We were close to Trinidad and the sound of steel drums and Soca (Soul Calypso) blasted in our boat. It was the first English radio we had heard apart from the BBC on short wave and dad wanted to make sure we heard it all!

We ran under spinnaker the whole day and rounded the headlands known as "The Dragon's Mouths" and turned into Chaguaramas Bay where we saw an aluminium forest of masts. We did not know where to go so we called on the radio.

"Fia" a sailing boat from St Pete in Florida answered and helped with the info we needed. Dad and I went to Customs to clear in. The guy was very friendly, but he told us that we were not allowed to bring our dog Jack ashore.

When my dad told him that we would be hauling the boat out so technically the dog would be ashore. He repeated himself stressing "No, no, no, don't let ME, 'catch' the dog ashore." In other words he couldn't be bothered.
We hauled out at Peakes one of only two yards that could haul Gilana because she weighs 66,000 pounds.

Nicholas and Michael ran the hauling out of our boat, both of them are very good at their jobs and are kind, helpful and were some of our first friends.

Nicholas had a funny saying whenever someone drove their boat into the concrete dock, he would stand there and wisely say, " Ye shall approach de dock at de speed dat you intend to hit it!" In his singsong Trinidadian accent it made us laugh time and time again.

When we left Trinidad we went to Grenada.