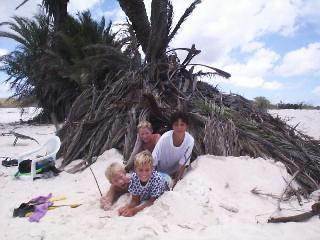 The island of Blanquilla has very few beaches along the rocky coast but they are spectacular. Blanquilla is mainly desert, I figured this much when I saw all the Cacti and thorned plants. Lee-Ann and I went ashore to go and play, we realized that most of the beach has little pebbles just under the water, great for a back scratch but not for the dingy bottom. The pebbles made a lovely chipping sound under the water.

My Mom assigned us the job of making a pile of palm leaves where it was safe to beach the dingy, the best place being the right hand side of the beach where the sand curves protecting the dinghies from breaking waves, current and wind. We decided to make the palm leaves stand up to provide shade, but the fronds kept falling over. I can't remember whose idea it was to make a little hut leaning against the palm tree for support. We named it "Palm Cottage" although to this day dad calls it " The Horrible Inn", because the palm fronds were not very strong we dug the sand away inside until we could almost stand up.

We kept the sand high on one side for a table but Jack decided it was his bed. We wanted to sleep there overinght but two kids chickened out and just Ben and I were left. In the middle of the night he slowly crept over to where I was sleeping and whispered in my ear that there was a donkey at my feet. It had obviously smelt the food that we were cooking and had come to see if there was any over, it had obviously seen the cottage and decided to check it out.

Thank goodness I wasn't two inches taller or the donkey would have been standing on my foot, this has happened to me before when I was about five and it was not pleasant. Anyway we survived the night, this time I tucked my feet in and slept in a ball. Adrian, Bens father was sleeping in a hammock just outside to make sure we were ok. If he had woken up he would have seen a sandy grey donkey sniffing around his toes.

On the west side of the island, among the shrubs there is a fresh water well which is not drinkable, but was used to shower and to wash clothes. Blanquellian seawater is sparkling clear and we enjoyed plan-o-subbing through it. A plan-o-sub is an underwater sled that you tow behind the dinghy, it allows the rider to dive to great deapths at about three miles an hour.

The wild donkeys (We found out there were more than one, thank goodness not in the middle of the night) roam in the bushes during the day staying in the shade, but come out to enjoy a peaceful night under the stars.

I was sad when it came time to leave but dad reminded me that there were more exciting places ahead. The day before Steadfast had left for Panama. It was just Island Fling and us, for the rest of the way. We arrived in Tortuga 5: 30 that afternoon.