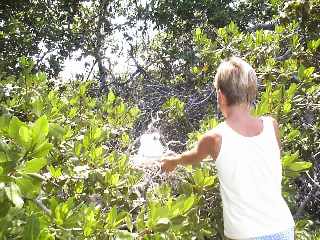 The Morrocoy National Park is on mainland Venezuela. Scarlet Ibis are the main attraction although we came here to escape from hurricane Joyce, which thankfully disintegrated before hitting us losing her speed and instead of bringing devastation our way she brought hot cloudless weather.
We went to two places there, Ensenada el Placer and Boca Seca. Ensenada el Placer is a little lagoon among the maze of mangroves. It is well protected from wind, current and swell. The water is like glass and I enjoyed skiing through the maze of mangroves. An island lies in the middle of the lagoon, and this is where the Scarlet Ibis roost.
During the day they are ashore eating worms in the mud, hundreds and hundreds of them. The array of colors is amazing. The mature ones are a beautiful dark scarlet, the youngsters are ebony black and in the middle the teens scarlet with black splotches.

I took the dingy and tried to get up close to them so I could take a photo, unfortunately the water surrounding the island is too shallow for the dingy and walking would be a problem because the mud sucks like quick sand. So I took a few faraway pictures and hoped for the best.

The little island of Cayo Boca Seca has a few twisted paths leading you to various beaches. We saw our first wild seahorse here, it was amazing seeing an animal in the wild for the first time instead of behind a glass panel.

The Aves are made up of two islands, Barlovento and Sotovento, meaning windward and leeward in Spanish.
Barlovento is a dry cracked desert island and the only plant life on the island are mangrove trees. The sand on the beach is also dry and has a red tinge to it. Barlovento I call the bird island, because it is isolated there are no predators only birds. The lack of predators has had a huge effect on the birds that live on the island. They are as tame as domesticated animals and build their nests to the bottom of mangrove trees.

I got really close to a baby in a nest, a hideous thing, quite fluffy but a face only its mother could love. I found quite a few bird bones on the island, and another bone of a snake which means predators might be making a comeback. Out on the reef, there are hundreds of fish, mainly Durgons and Queen Triggers. The waves had etched huge canyons in the coral and when a big wave comes you dive down to the bottom and hang on.

At Sotovento one morning while doing school, I heard a noise that sounded like air being blown out of a snorkel. I rushed on deck and gliding next to Gilana boat were two dolphins. We jumped in the water with snorkeling gear on. The two dolphins actually came up close and started doing hoops. Getting the idea I copied the dolphins and soon we were playing copycat. I would do a summersault, and then brush my back against a sea fan and the dolphin would do the same. We had a wonderful time in Venezuela and look forward to returning there one day soon.
It was time to leave, for Bonaire, in the Dutch Antilles.