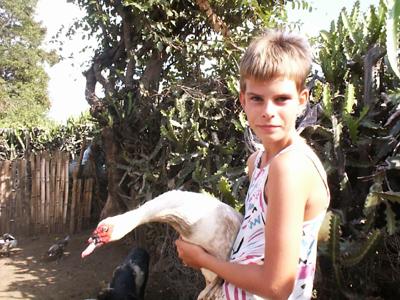 Josefina is a fisher woman in the little village of Maria del Portillo. Her tanned face, blistered feet and stumped fingers look out of place in her thirty-sixth year. As dusk turns to night and you are settling, keep your ears perked for the gentle dipping of oars in water as Josefina comes along side your boat. She will hand you a parcel of what she calls pan 'bread'. Invite her aboard for a cup of tea or cola. She will probably offer to take your garbage ashore to be thrown away. The following day when you go ashore you will probably end up at her house while trying to find your way around the village.

Arriving at her front yard gate you will find your garbage spread out on the ground as pigs root through it. Littering, no never, when Josefina brought your garbage ashore she purposely spread it out on the ground so that the pigs could root through, eating leftover food, potato peels, orange skins and so on. When the pigs have had their share and have left for a cool place to lie down in the shade while all the smaller animals i.e. ducks and chickens arrive and eat what's left. After all the animals have had their share of food, Josefina comes along extracting bottles, cans and other savable things.

Bags were used by the village children as kites and by the adults as leak prevention gear. Wine bottles I found the most amazing, after dipping a piece of string in alcohol and wrapping it around the bottle the string is set alight and while still burning is placed into a tub of ice water, the bottle cracks and voila, a chimney for a gas lantern.
I was stunned when the bulk of a bull strolled past Josefinas front door, followed by a few hens with chicks pecking at the dirt in the bulls shadow. Maria del Portillo is a place I would like to visit again and some day I will. 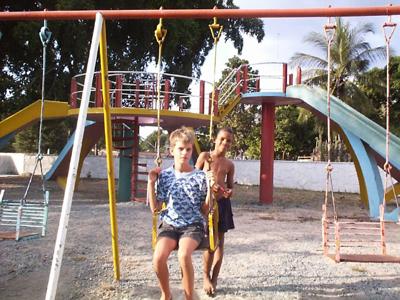 We tied Med-moor to the yellow customs dock at Santiago de Cuba. A little Cocker Spaniel led by two customs officials came aboard our boat. Jack our dog was not very happy at this new arrival and was even more surprised when the little dog jumped into his bed. Just outside the yacht club gate there is a park with swings and slides. The slides are polished cement and are very slippery. The swings weren't that good, being made out of metal and in the Cuban heat fried who ever tried to swing on them. An avenue leads you down the street the rattling sound of seedpods drowning out the sound of nearby factories. I don't know if I will come back to Santiago de Cuba for I don't like the noise and pollution.

The entrance into the bay of Baitiquiri is hair raising and together with following seas really destroys your manicure. The entrance being only fifty feet wide between the cliffs and even in this narrow channel there are coral heads.

Inside the cut, green valley mountains protected us all around. The customs men came aboard and cleared us in. The weather turned and we became boat bound as we waited for weather for eight days. When we wanted to leave we tried to reach them via radio for two days calling every two hours. In the end we threw a bottle over the side of the boat with a message in it. They gut the message and two hours later we were on our way to the Bahamas Yippy :)