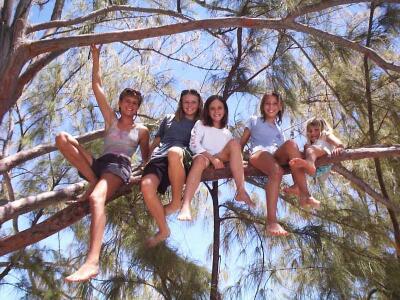 The Bahamas: Our trip down to Thunderball grotto Bahamas was amazing, we had so many varied conditions and one day, we had no wind and the seas were flat so we decided to have a play day. We launched the dinghy into the water and got the kneeboard out and went skiing. There is nothing like skiing in mile deep water let me tell you that. That evening just before sunset we went for a plan o sub behind the boat before having a bath in the deep blue ocean.

Thunder ball Grotto is where they filmed the James Bond movie Thunderball. Thunderball grotto is made up of a few little islands one of which is the home of the cave which is an underwater cave with a big air duct under the mountain and a whole at the top letting light in and giving coral a chance to grow. Kim, Darlene and myself also found an abandoned bar on another little island with a lagoon and a seawater swimming hole. After spending only a day we sailed down to Georgetown once again. We hade the same as last year kids day and everything else that comes with the Regatta. But this time we stayed longer and I made some wonderful new friends. We did so much together that I can’t recall all of it but these are some of the things that stick in my mind.

We hade two different forts for one the girl’s fort and the boy’s fort, go figure. The boy’s always stole things from the girls ground fort, so we built it in the trees. Yet still things would mysteriously go missing. The only problem was we didn’t know were the boys fort was so I climbed into a tall pine tree and watched the boys go into the bushes. One of them had bright red pants on needless to say we found the fort and took our things back. After Regatta was over and there weren’t as many kids left we formed a club, girls and boys in a yellow shed that stood on the beach. 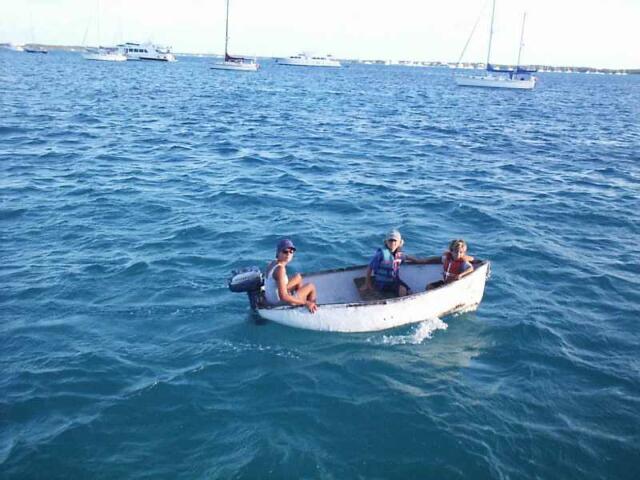 We had lots of fun in it and also came across a wrecked dinghy and broken motor.

We fixed up both and we now had a means of getting to boats incase of an emergency. Katie on the boat Grace and I also formed a kids game group after bible studies twice a week. One handed tug o war, pudding eating, egg toss, and much more, including a relay races which involved runing with an egg in your mouth. Maggie one of my friends tripped and bit the raw egg Yuck! They also had bonfires on the beach and we would get some dry sticks and start a bonfire of our own. Unfortunately one of the younger kids marshmallow sticks caught on fire and in the hurry to turn around and put it out they caught someone’s pants on fire MINE! I still have two scars and my pants still have burn marks but other than that I turned our no worse for wear. We always used to go to ocean side on the other side of the island and to get there you havd to cross a cut in the land about 100yards/meters wide, but only about 4.5 ft deep or upto my chest. I always ended up carrying at least one person across being the oldest and it is not funny when dinghys speed by you practically running you over.

There were often good waves on the other side and we would spend hours playing in the waves but at least one person would watch for sharks on the beach, for more than once we would have to get out of the water until the sharks were no longer a threat. We also had sleepovers, games night and movie night. One evening all the kids is the harbor were invited to go to a big powerboat to watch Shrek. The owners had two monkeys and when we arrived were doing all sorts of tricks it was great. 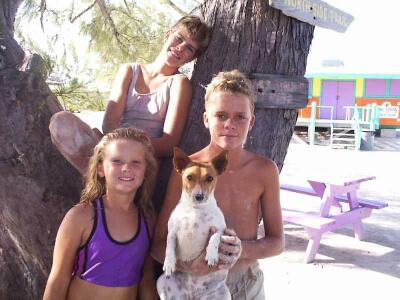 Ali, Greg, myself and Nina, Gregs dog went for a walk on the other side of monument beach, named for the monument standing at the top. Greg said he new a short cut and led us strate up a rock face. It was so steep I had to put Nina his little Jack-Russel in my backpack with only her head sticking out, we finaly reached the top rested a little before carrying on down the other side. At the other side we swam and played at a pool near some rocks were we did some cave exploration. Greg also found a huge piece of sponge which he wanted for his dinghy but the piece of sponge was so big two people had to carry it and I was one of the lucky two who had to carrry this piece of sponge which was wet and weighed a ton for what seemed like a mile.

One day a new friend of mine was asked on a sort of date to go to ocean side with him. She had never been on a date befor and asked me if I could please tag along behind them and make sure everything went smoothly.

We, me and two other friends, took a path into the bushes which lead nowere, yet we kept going bundu bashing our way through the foilage. I was in front to make sure the path ahead was safe, and it was a good thing too for I walked right through a spider web and the spider the size of my hand black and hairy with yellow strips starts climbing up my leg I quickly brushed it off, chose another path and only later when we were back on the beach did we find out that the spider was deadly. Thank goodness I didn’t know when the spider was on me or I would have panicked. Well you have now heard my fondest memories of Georgetown I hope you don’t repeat some of the accidents mentioned here like never run with and egg in you mouth, even if you don’t play with fire you might get hurt by it and never stray off paths into giant spider webs. We left Georgetown on the 14th May bound for Bermuda somewere in the middle of the North Atlantic Ocean.