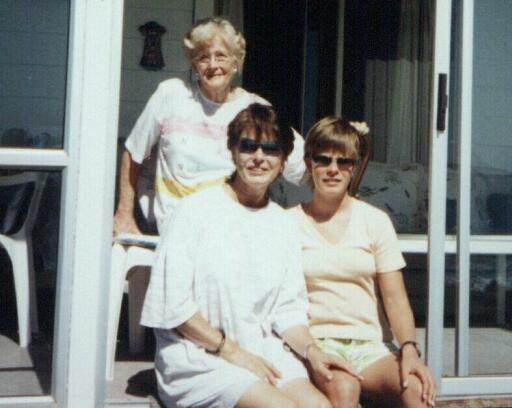 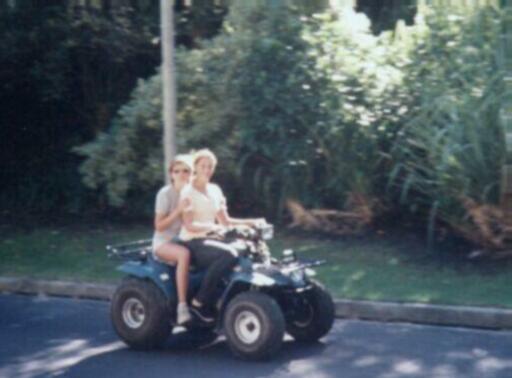 14th March Friday I did not complain when I was woken from my uneventful sleep because the idea of spending the weekend with Nadine, her mother and friend on a camping trip knocked all drowsiness out of my system. I was fired up and ready to go. I never quite imagined how full of life a two person tent could get in a steady breeze and it was to my cost as I soon found out. Nadine and I spent the night with the tent roof an inch off our noses. The waves must have been pounding against the shore in an incredibly vicious game, I can only assume this for it was hard to hear anything above the roar the tent was making as it faced the wind attack after attack losing ground and then gaining it again. It so happens that whenever one is fully dressed they get a strong urge to go for a swim, well that's not ENTIRELY true we weren't intending to go for a swim but while crossing a current swept river Nadine lost her footing and as a result we both had a lovely dip. We returned to the camp site only to change for some reason into our swimming things. One the drive back Nadine was kind enough to be caught in the act with a hand full of sweets, which made for a lovely photo. As you can well imagine I can't write all of this in one day so you will be able to see a definite change in my writing, this changes with my mood, at the moment I am full of energy and vigor so my writing is fast and funny. When one has nothing it is amazing how they can still give something, if and only if they truly wish to. This was displayed to me while waiting in my Aunts car when she popped into a store to purchase something. Across the road was a fish shop, one of those that have cracked blood stained tiled floors. A lady had just acquired a few cooked pieces of smoked fish. As she was exiting the building she saw a small boy probably aged six, with rags for clothes and bare feet that carried all the cities germs. Her heart went out to this boy and gave him a piece of fish before continuing her stroll home. The boy smiled back at her, one of those really meaningful smiles, the ones that you know come right from the heart then he sat down on the cracked cement to cherish his small morsel of food. About to bite into the food he looked up and there was an old man, each of the many creases of his weathered face held some sort of story. His heart went out, as far out as it could, he stifled his huger, got up and handed the piece of fish to the man. No words were needed a mutual understanding had passed as they both held the piece of fish, the boy let go his side turned on his heel and left, although his stomach was empty his heart was full and that's what matters after all. The weekend of the 21st I spent with a friend that, funny enough I met in Tobago three years previously. The two days were spent at the Waterpolo pool as my friend, Lee-Ann's father plays this game. It was great to see Lee-Ann again after we last saw her in Miami. Lee-Ann has changed so much, but then I suppose so have I. The teenage years are probably the most difficult, especially for those surrounding the teenager, parents, teachers and others, you were also one once remember. 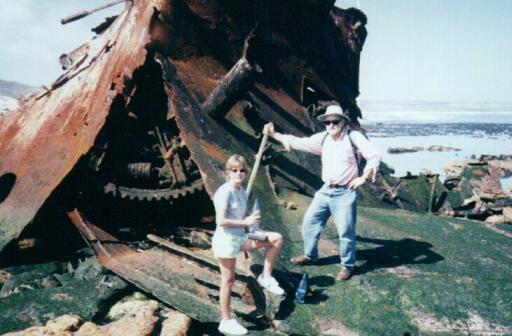 The Thomas T Tucker, a boat wrecked off Cape point, was explored, prodded and poked by Katrin, Dave and I on our trip to the Cape point Nature Reserve. The trip to the wreck for me, I think was more emotional that you can imagine, the eerie figure was dashed up against the rocks in the dead of a a black velvet like night. The souls on board were unaware of the imminent danger ahead, until it was too late, shouts filled the air and then all was silent. To me it was surreal, because I live on a boat.

Nadine was kind enough to let me spend the weekend and go for a teeth shattering, knuckle whitening, Dakar rally type ride. Now you must be thinking to yourselves, what could two teenaged girls possibly get up to. Unfortunately I was too busy holding onto the contents of my stomach to take pictures so the only photos you will see are the ones where we were stationary (but still shaking). You see, Nadine has a "Quad" a four wheeled All Terrain Vehicle, we buzzed around everywhere in Hout Bay, with Nadine driving. My thanks to all at Camps bay Primary and High school for helping me to get in touch with my long lost class mates. Maciek was kind enough to show me around the grounds and get me in touch with a few friends. Although I would have liked to see a few more it was not possible at the time and I am grateful that I got to see the ones I did. One of the things that I accomplished while in South Africa, as well as renewing old friendships, I also studied for and got my Restricted Marine Radio License, which exercised my mind, while on holiday. It was with a heavy heart and incredibly over weight suitcases that I left my Grandmother and Aunt at the airport. Although both my cabin and hold luggage were over weight I managed to get on the plane without hassle. I had an eight-hour wait in Heathrow airport before boarding the BA flight that would take me back, home.