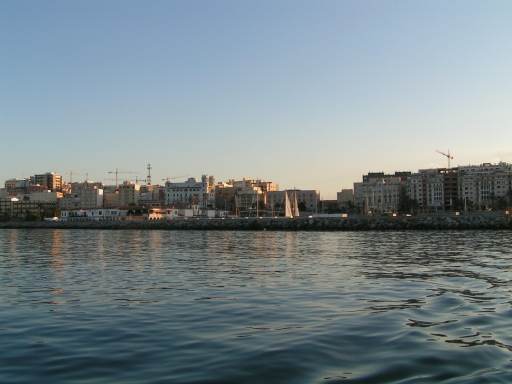 Motoring into the huge bay, sea like glass and not the slightest hint of a breeze we decided to open the air vents in my cabin, the heads and saloon. With a slight draught through the boat we were occupied looking for a fellow boat and taking pictures. Out of nowhere a standing wave, made by a ferry seemed to swallow our bow.

We have encountered some bad weather in our seven years of sailing but never in all this time have I seen Gilana's bow disappear completely below the surface. Water rushed over the deck, mom was on deck at the time and was drenched up to her knees, water hit the foot of the mast and surged up into the stack n' pack which became flooded. Two feet of green water covered the deck up to the cockpit sweeping with it coiled lines and any other loose gear we had had on deck.

I was scared, the sudden 'weightless' feeling was not comforting, as I didn't know how far down Gilana's bow was going to dip.

I heard water downstairs and with a sickening jolt I realised that the air vents were all open. Water had poured in, wetting both bunks, the floor, even the walls as the water hit the floor. My bathroom was flooded, but shutting the door I decided to concentrate of my room first. Mom on the other hand had her hands full wringing out the contents of the saloon, not to mention drying everything that was on the navigation table including, the laptop.

Arriving during siesta the fuel station was shut, so unable to buy diesel we concentrated on drying out the boat. I went ashore on a scouting mission, trying to locate a supermarket.

Like mainland Spain, Ceuta's narrow cobbled roads wind around the town, a hopeless maze for anyone not local to the area. Even being able to speak the local language, Spanish, finding the supermarket was impossible and I soon became more occupied trying to find my way back to the boat.

When I eventually got back mom had washed my linen and the saloon cushion covers with the help of her new 3 kilo all plastic washing machine.

When the fuel dock opened we were shocked to find that the price of diesel was seventy cents a litre opposed to the fifty-three cents in Gibraltar some fifteen miles away.

We decided that we still had time to drop lines and quickly motor-sail over to Gibraltar. We would arrive at night but as we had been there before, both mom and dad were happy to make a night-time approach.