What a hot topic this has turned out to be! Once again, the feedback we are getting from our readers is that eduction of the next generation is an important issue. It is good thing too, as what legacy do we leave FOR this planet once we are gone? Only our prodigy will, or can, make a difference to this beautiful world we all have to share. 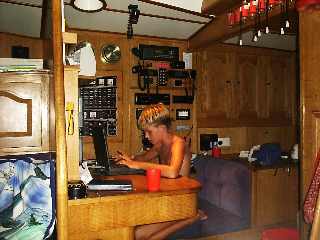 Liz types one of her early journals for this web page.

Before we went cruising, this subject was deeply investigated. We sought and met other cruising kids and ex cruising kids. We found that they, as people varied from "different" to "exceptionally different" It struck us that the same distribution of intelligence and ability was evident amongst cruising kids as any others, however several things set them far apart from their peers.

They were by far more mature than their peers. These kids play and play hard, they have the opportunity to play as children should, without the worries of peer pressure and being "uncool" that exist in the school systems. Kids should build huts, and treehouses, and should, I believe, do this at an age where the lessons of structural engineering, stresses and strains, can be fully appreciated along with hopes and disappointment. Unfortunately, a 13 year old in a city school would be ridiculed for playing in such a manner. Maturity is further enhanced by being forced by circumstance to interact with the real world without the benefit of a social umbrella. Most of the friendships and social interactions occur with adults, as peers, and usually well balanced like minded peaceful cruising types (with exceptions).

Nature plays an important role. She, far from being a benign mistress, has to be treated with utmost respect. This humility is apparent in cruising kids far more than any other group. They see life, death, calm and tempest. They deal with her at first hand, and have seen her fury, and the results of environmental catastrophes, natural disasters, and wonderous beauty with a new appreciation, and come to realise that we are all small parts in the circle (irrespective of your ego, status or wealth) They, unintimidated by assumed importance that some portray, deal with all men equally. Cruising kids appreciate life in all its forms. 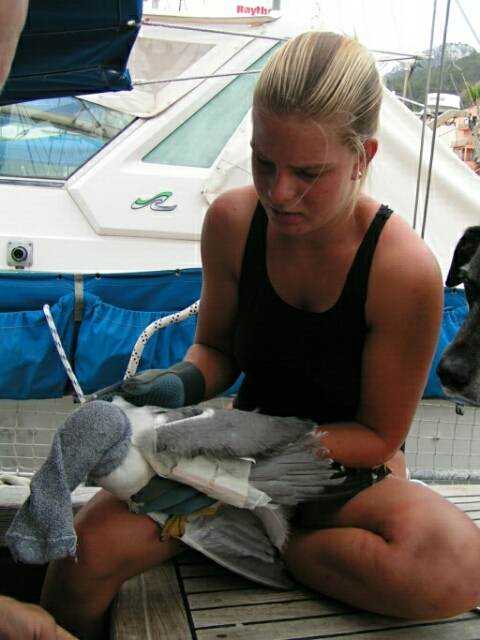 Liz splinting a seagull's wing, "it also has a right to life"

We interviewed a Child Psychologist prior to departure. We realised that cruising is an amplifier, a magnifying glass, that will enhance the childs attributes held prior to cruising. Simply stated if they were in the bottom of the class at school, they are at risk of falling through the net of average that would catch them in a school system. They could be severely limited in their education aboard. On the other hand, kids who are in the top of their class, could excel in the cruising environment. It is up to us (YOU) to create an environment where excellence can be achieved. 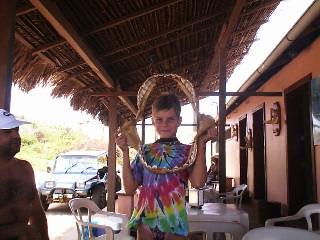 Liz experiences how big a sharks bite can be.

We investigated several "systems" for distance education and found some materially lacking, and worse still found others to be laced with dogma, clear political stances and religious doctrine. We rejected without remorse any material that was not objective, some even excluding Darwin's Origin of Species. We were forced to invent a method, or curriculum that would be holistic and neutral. We concentrated on her ability to analyse and logically follow from hypothesis to theory and decision making based upon research and instinct. If you have clicked this button hoping to find a list of resources, I am afraid you should look elsewhere. You cannot defer your childs education to a book list, instead you will have to become totally immersed in developing your child, and will possibly, no, undoubtedly find it is the single most rewarding thing you have ever undertaken. 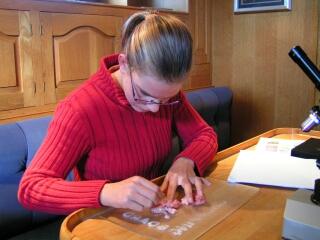 Liz dissects a brain for examination under the micrcroscope.

We placed low importance on grades and levels, an entrance qualification examination along with an interview will secure any tertiary education enrolment with sufficient petitioning.

Originally we set about in the traditional way, dividing the education by subject, English, Mathematics, History, Geography, Biology, Physics, etc. This has evolved into a new order and now, we concentrate differently. I cannot suggest or promote our ideas, your child is your responsibility! What we evolved was two, only two structured daily lessons, Mathematics in its broadest sense, and Literacy including multiple languages.

Maths was normally two hours per day, and we tried to make it fun. Often we had forgotten what we had learned in school and university, and when she got stuck with a problem we relished the opportunity to help, not to show her how to do the sum or solve the equation, but how to approach the problem, find the solution possibly elsewhere and apply that solution. Mathemtics became the prime intellectual problem solving and analysis tool, the math itself almost became the secondary benefit. Liz can now do simultaneous equations in her head, not always 100% accurate, but more importantly, she has realised the power of her own brain, and is not intimidated by the seemingly impossible. If she does not know the answer, she knows how to find it. It has also given her an appreciation of numerecy, she knows the oneness of one, and the galactic proportions of the universe, she grasps and can relate concepts, like Einsteins General and Special Theories, not always agreed with, but fully understood. We made extensive use of the Internet and computers. Mathematical modelling, what-if studies, and graphing were done, plotting functions using spreadsheets, and working backwards in an interative way to achieve trigonometric equations that resulted in the classic curves. How these pervasive curves crept into every day life from electricity to epidemia. Then we would walk down ancient paths in Knidos, where geometry was invented, and see the view and feel the heat that Eudoxus felt as he started playing with triangles and turned his experiments into trigonometry. Imagine a field trip like that, possible every day. 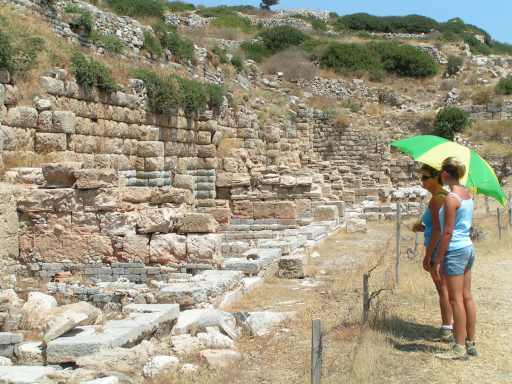 Geometry was discovered by Eudoxus, who probably bought his vegetables right here in downtown Knidos

We looked at languages in a new light, we asked what the point of language was anyway, then followed the history of language, the similarities, differences, and the cultural influence causing these. We studied early migration of man and traced his language. We played music, listened to lyrics old and new, and read poetry, rejoiced in the opportunity to discover what our teachers were on about but could not convey due to whatever systems restricted them. Language was a "Robin Williams" experience. The whole point is to communicate, ones desires, love and fear. How language influenced business, politics, war and peace, and how the written word was a powerful tool. Here a word of caution, Liz has read a huge amount, literally hundreds of books. We made one mistake, and suggest you insist your kids read aloud with a coach reading along, this is commonly done in class at normal school. Without this, mispronounciation will occur.

We made extensive use of video documentaries, in fact while in the USA and after, school would start after breakfast with a documentary video. After screening, a thorough analysis would be done, and notes made. We went through "The Ascent of Man" (Bronowski) "Blue Planet" (Attenborough) the list continues, From Hiroshima to Rosa Parks. When we covered a subject, we probed the language of the writer, the history and the geography of the region in question. Sociology and anthropology will continue to fascinate us.

Liz started her booklist in the Azores, since then she has read nearly 200. Those were read for enjoyment. We have many other books on board as reference materials as well. The following books, however, we regard as essential reading, they are coveted and we are almost tempted to say that no education is complete without reading them.

Booklist. (By no means complete)


We must also stress how easy it is to use public services like libraries and museums, for instance, in Portugal most museums are free entry on Sundays, while others are really inexpensive and of course completely worth the money invested in your childs future.
Home schooling has also a much better teacher pupil ratio than in schools. We have found that two intensive hours of one on one teaching (in 20 minute sessions because of concentration span) is sufficient per day.
Sometimes kids have "off days" where things just don't soak in, on these days we cancel school. On the other hand if it is a rainy Sunday, and there are no kids in sight in the anchorages, we would do school, sometimes 7 days a week, but when another "Kid Boat" arrived School would be cancelled for a few days, invariably they start talking about their schooling on board and normally a few days intensive playing (mostly educational) they would get together and do school as a group.

Sex Education. We are an extremely open and close family. We have never referred to reproductive organs by any other than their proper name. Liz understands the carnal urges of the need to continue the species through direct experience because every time we have been privileged to witness spawning fish, mating or calving Dolphins, we have understood with her the intricacies of the mating rituals of all species. From colourful displays of reef fish, the strutting of tropical birds, through to bikini clad young ladies doing just the same on the beach she has gained this objective view. While we are approachable, she might have had doubts about asking us, her parents, specific details. We purchased a book called "GETTING IT ON" (ISBN 1-885535-10-4) dealing with human sexuality in all its beauty and ugliness. This book published by www.goofyfootpress.com is a blatant and straightforward book, playful, yet sensitive. We told Liz that she was not allowed to read it from cover to cover, but it was available for her to refer to in case of any embarassing questions. A final word of advice, and arguably one of the most important. VOCABULARY! Without it, philosophy is mute. Without the words, the concepts do not exist. Read.

We have finished schooling Liz, it's not a case of "Job Done" more like a "Work in progress" however, we have taken her as far as we can. We have only made one DEMAND of her, we insist that she seek and find happiness. Now its up to her. Go Baby Go!!!

We hope that the above is useful to you, please keep the questions coming....