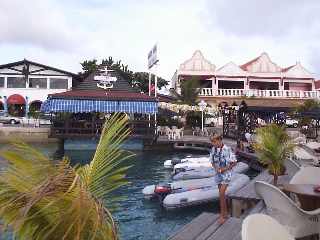 Bonaire and Curacao are members of the Netherlands Antilles or A, B, C islands which used to include Aruba.

Arriving in Bonaire we passed some huge mountains of salt, and as the sun was setting we picked up a mooring buoy and settled in for the night. The light of the moon was enough to see the fish swimming below us among the coral reefs. Customs is a little way off, and at a brisk walk you should get there in about 5 minutes, but being a tourist it takes a little longer.

Our email was done at a little café called De Tuin. Originally being a Dutch island, shutters and colours are traditional. Trees overhang the café, making shade for outdoor eating. The berries on these trees are sinuously embroidered in the cobbled road.

Island Fashions is one of the many tourist shops along the waterfront, it is brightly coloured in mauve and turquoise, and shutters are once again a must. Even as a waterfront street the buildings are clean, colourful and welcoming. The old meetinghouse is one of the most beautiful buildings, yellow and white. Palm fronds and the Netherlands Antilles flag wave gently in the tropical breeze. The diving in Bonaire, even right under your boat is incredible. It is one of the top ten dive venues in the world. I logged my deepest scuba dive here, 111 feet. Dad was my buddy, while Mom dived with Suzette a friend we had met in Trinidad.

We arrived in Spanish Waters, (which made a change from Roger Waters, who we had been listening to almost constantly on the CD.) Spanish Waters is on the south- western side of the island. We made some friends on a sailboat here, they were preparing to go cruising like us, dad helped them out with a few questions and answers, in return they took us on a tour of the island.

Our first stop was Iguana Bay on the western tip of the island. Being on the windward side, the sea is very rough and many blowholes have been etched out of the rock face. For some reason an Iguana population has thrived here and are now a tourist pilgrimage.

Another little bay, West Point is a tourist must. A little restaurant sits on the edge of a cliff, giving diners a spectacular view of the bay. Locals dare each other to jump off the cliff face, a 60ft drop into the ocean. I thought it looked like fun so the very next week, we left Spanish Waters and sailed to West Point to jump off the cliff.

I never realized how far the drop was until I was standing on the edge and jumped. For a few seconds I was flying in a dream, but the shock of hitting the water awakened me in an instant. The terrible part was that the video camera we were using chose that moment to die, two more jumps and we finally got it on tape. We left the next day for Haiti.