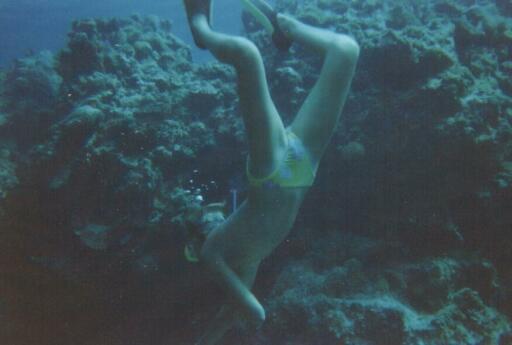 We were on our way to Cuba, the wind on our beam, when we found out that the town we were headed for as a port of entry was no longer a port of entry. We had to make a quick change of course and headed south to the Cayman Islands.

This misunderstanding and the fact that the first big northerly on the 18th of November was on its way made us run down to Grand Cayman to seek refuge. The race was on, who was going to get there first, it turned out to be a tie, arriving as the storm hit. George Town, Grand Cayman is built for tourists, and curio shops line the streets. Being a British Island we were only allowed to stay for 10 days because we had a dog and their strict quarantine regulations still apply. In those ten days we explored some of the town and went diving on "Tarpon City", a cave filled with huge tarpon, a heavy built silver back game fish. We also tried to go to "Stingray City", but because of our draft, 8ft, we got stuck and had to be towed off by a French Canadian man in his motorboat. Fast facts about Grand Cayman: Grand Cayman is 22 miles long and less than 8 miles wide The maximum elevation is 80ft Climate averages 85F in the summer, and 75F in the winter. Average annual rainfall 40"-60" most of which occurs during brief downpours from May to October.

We dropped anchor in the little bay of Carapachibey on the island of Juventud. Looking at our surroundings, I realized that a dense pine forest, the sweet aroma wafting through the boat, surrounded us.
There is a little red and white lighthouse on the point of the island surrounded by four pointed metal sheets indicating north, south, east and west. Cuba has the biggest collection of lighthouses I have ever seen. The lighthouse keeper told us when we tried to go ashore that boats were not allowed to anchor in the bay and that we must leave in the morning. There wasn't much point in us staying anyway for the water was not clear and sharp rocks edged the shore. Early the next morning we raised the anchor and left.

A twisted mangrove maze offers you a world of adventure at Cayo Matias.

To many, a mangrove maze is a breeding ground for mosquitoes, but to the adventuresome few it offers you an exiting adventure, motoring through the twists and turns not knowing what awaits you around the corner. To my surprise the water inside the maze was clear, which was unusual for mangrove water. Did you know that some types of mangrove drink the salt water, extract the salt and sweat it through the pores in their leaves while others have fine hairs on their roots that trap the salt and the plant doesn't even absorb the salt?

Adult Barracuda lay their eggs on the roots of the mangrove trees so when the young hatch they have plenty of food. Outside on the reef the water is an aquatic paradise. Not many people stop at Cayo Matias so the fish are not afraid of you. In fact when I jumped in the water the fish instead of dashing for shelter they surrounded me, my mask knocked of my face by a friendly blue runner. I came to know a family of Queen Trigger fish during my long snorkels. It is amazing how they keep in single file from biggest to smallest.

When we were at cayo avalos it was not that pleasant. The one short beach on the island is very deceiving, although it looks solid it is actually quick sand and we had to pull Jack out quickly before he got stuck. Out on the reef there is a shipwreck and we went diving on it, we saw a lot of big game fish and a few rays. Dad found a piece of propeller worth a lot of money but we had to leave it because customs would search the boat for artifacts and weapons.