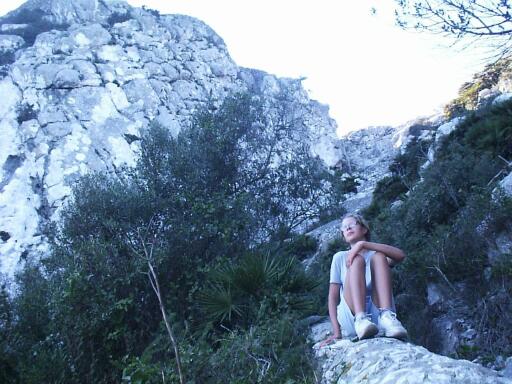 Portugal: Our trip from the Azores took 10 days and we arrived in Portimao, Portugal on Tuesday the 10th August. The Marina where we were docked provided a free taxi service twice a day to the Modelo Supermarket. I went the day after we arrived to do some shopping and to see were, how far and how big the Modelo was. We only stayed on the dock one night for it was very expensive and the next day when we were out at anchor I made friends with another cruising family on Nosile who had two girls onboard, Amilia, fourteen and Pippa, ten. We had fun on the beach and via a few caves and arches we found a little beach which not many people go to and played there for the day. We also found a campfire that had been used and put out the night before but the embers were still hot and we soon had the fire going again. The next day mom went to a book swap on a French boat called Joue de pose and informed me that there were four children on board, three boys and one girl. The girl was nine and the boys were fourteen, fifteen and sixteen. All seven of us went to the beach where Amelia, Pipa and I went yesterday. We found a narrow cave that went right through a land island separated from the main rock by an arch.

We spent the whole day digging it out and eventually it we big enough for even Huge the oldest out of all of us to get through. Over the next few days it was rainy miserable weather and nothing worth writing happened. One day mom took me to the internet café in town and the owner had a little black kitten who loved running up and down the table when people are doing email. Sometimes Cleo would even run over someones keyboard or land in the wastepaper basket knocking it and its contents over onto the floor. He also had a bunk bed built over a round table where people do email and to get to the bed you have to climb a six or so foot ladder, which is no problem for Cleo. She even climbed up one of the poles holding the bed and looked a little bit like Mulan climbing up the banisters to the emperor’s palace. We left Portimao on Saturday the 28th September at 10am and arriving in Faro at 7.30pm that evening. We only spent one night in Faro leaving the next morning. The sail to Cadiz, Spain was an over nighter and we arrived the next afternoon.

I will have to tell you about Spain in two sections for while still in Spain we stopped in Gibraltar a small peninsular in Spain but owned by the British.
We arrived in Cadiz, Spain at 1.30 the following afternoon after changing our clocks forward one hour we fueled up at the fuel dock and watered and cleaned the boat at the marina, before leaving the dock and going to a quiet bay nearby. Mom has started this new arrangement that twice a week I have to cook dinner. Today was the first day of that agreement and dinner was very simple scrambled eggs on toast and soup for I was very tired because I stayed up late on watch the night before.

There is a little playground next the beach where the restaurant is and since it was a weekday and there were no other kids about Jack and I went on the playground. His favourite, I think were the swings and then the slides. At the edge of the beach there is also a pine forest where campers and caravaners can spend the weekend. This was the first time since we left to go cruising that I went in a real forest. The pine trees and pinecones were exactly the same. There were no squirrels in the trees, which I found funny but as a result the pinecones were full of pine nuts. Within five minuets I had a handful of nuts and while eating them savored each small morsel.

We left Cadiz on the 6th October and Arrived in Gibraltar on The 7th.

Gibraltar:
Known best as “The Rock of Gibraltar”, Gibraltar is situated on a peninsula on the coast of main land Spain and the British and Spanish government are still fighting over who owns it. The border between Spain and Gibraltar is a row of buildings and a runway which we were anchored right near. It was nice to hear English again after being in The Azores, Portugal and Spain. Shop owners are mainly Morrocan since North Africa is only a few miles away. The currency here is the British pound and in some occasions the Euro.

One of the places we went to was the top of ‘The Rock’ to view the world famous Barbary Rock Apes. To get to the top of the rock was quite a hike and while climbing the remaining 600 hundred steps up to the top, out of a hole in the rock jumped two rock apes. After fighting over who was going to groom me the ape situated its self on my shoulders and continued the grooming process.

After climbing the remainder of the steps with a monkey on my back it hopped off me to go and greet the remainder of our party. At the top babies clung to their mothers while picking fruit and nuts off the ground. There is a sign saying "Please do not feed the monkeys", yet still tourists feed sweets, chocolates and I even saw a mother and baby eating out of a M&M packet.

Due to recent years of preservation the ape number has increased enormously and there are now over 250 roaming the upper rock. Our walk carried on along the top of the rock and down a narrow mountain path not often used. Among the many obsticles in our way we had to scramble down steps that were worn completely away and clamber over a few boulders that must have rolled down the cliff face at some time.

When the trail finally ended we appeared right on the other end of the rock and although it was getting late we still had quite a way home. We rolled into bed that night and our heads had just reached the pillow and we were asleep. We also went to "Lower St Michaels" one of many caves on Gibraltar. We had to climb down steep slippery steps to the level below before embarking on our cave exploration. We had to duck down and crawl through small openings in the rock and climb across rope nets covering sheer drops over 100 ft and a seemingly bottomless pit. We also had to climb up and down ropes and walk across natural bridges and ridges. The ridges are about two centimeters wide and two millimeters thick. Your handle preventing you from falling into a clean, cool, deep lake is a smooth cave wall. The amazing formations of stalictites from the wall and stalicmites on the floor. You will also see columns where stalicmites and stalictites have joined, and curtains formed by dripping water running along the cave wall. If you put your hands between two curtains and hit them with the back and front of your hands you will make quite a musical sound.

We left Gibraltar on the 22nd of November 2002 for a twenty four hour sail to Almerimar.