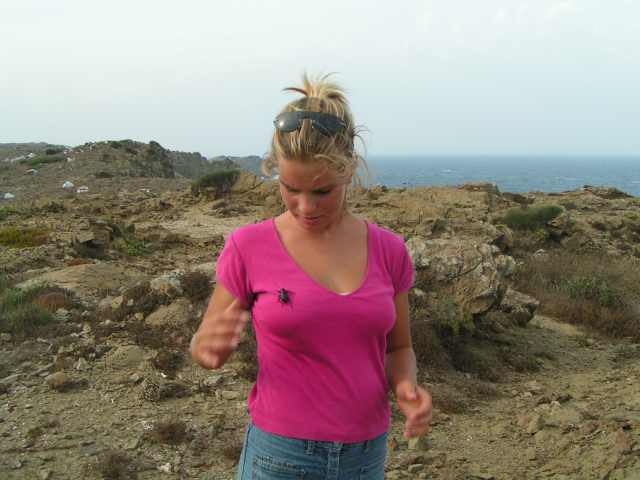 Looking at the chart I couldn't even guess where we were going to anchor. The port of Mahon has one main shipping entrance as well as another smaller entrance, which dinghies and small day sailors pass through.

Before I continue I must add that our engine gearbox started giving trouble and we no longer had the ability to reverse, which proved to be a bit of a problem as we tried to manoeuvre through the crowded anchorage. I can only imagine what the other sailors must have been thinking as they watched us trying to find the perfect spot, and missing it having to do a full circle to get back into position. Our whole song and dance reminded me of a song that I heard while we were in the Bahamas written and sung by fellow cruiser Eileen Quinn that goes ' East to starboard and hard to port, throttle down but we come up short. Up on the foredeck see them prance when they do the anchoring dance. That's not it, oh no you missed the spot, now one more turn around the anchoring lot, all the other cruisers see them stare, when we do the anchoring dance.'

As mom and dad always like to stay on the boat after we have just anchored I hitched a ride ashore with George, Becky and Chandler from Sirius. The trip into town was bumpy and wet, not to mention the fact that it took about twenty minutes and we had to cover a distance of about 1.6 nautical miles about 3 kilometres.

On one of the rides back from town we ended up getting so wet I think I would have been drier if I had of gone skiing behind the dinghy. One of the sights that we passed on our trip to town is the famous Hospital Island, which ironically no one has ever heard about.

The island situated in the middle of the channel reminds me a lot of Chacachacare in Trinidad with its walls struggling to stand up to the weight of the clinging vegetation.

When we arrived in the town we were thrilled to find out that there was a festival going on at the time and we had to watch our heads walking down the streets as mini tennis courts had been set up for kids and balls were flying every which way. As well as the tennis there was also a mini golf area set up but luckily it was enclosed with netting so there was no need to duck flying golf balls. I think it was on the final night of the festivities that they had the 'Riding of the horses', which was although spectacular to watch, very dangerous. Off the top of my head I would say there were well over twenty horses walking single file down the people packed streets.

Although no-one created a passage for us, you should have seen them move when the horses got spooked and decided to rear up on their hind legs. I saw that night, not for the first time that testosterone can be a terrible thing as I witnessed men with either a broken leg, broken arm or just plain broken self esteem make their way through the crowd to find the nearest stand by ambulance.

Not everything that we did in Mahon included going to the town and I had a lovely hike with Chandler on the peninsula that made up part of the bay. Naturally Jack came with me, as well as Maestro the dog on Sirius and I am happy to say that they got along beautifully which is not normal for Jack who seems to have a pathological hatred for the canine species, although I have tried to point out to him that he actually is a member of the canine family as well. To which I am sure his quizzical look means ' You can choose your friends but you can't choose your family.'Due to the vast amounts of sand stone deposits along the coast 'Honey Comb' weathering as I believe it is called, is everywhere and I was ecstatic to find some broken pieces scattered on the ground which I collected and have now added to my geological exhibit located in my middle cupboard.

We left Mahon on the 8th September into some not really nice seas, although now that I look back on it I've been in worse. To which my left wing part of my brain says ' Yea right, you've been in better too.

As Cala Santandria is a lovely little bay and I am sad to say that we only stayed there over night, although before the sun slipped below the horizon I did manage to explore a bit of the town and get myself mind bogglingly lost. This is starting to become a common occurrence with me, something like my four hour bus trip in which I covered a distance of four miles as the ostrich flies, which it doesn't. We left the next morning and pointed our bow towards Mallorca, finally we were going back to a place I feel I can safely call home.