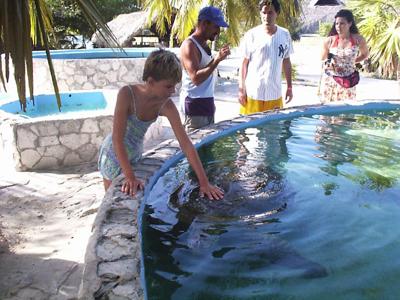 
We cleared in to Cuba at Cayo Largo, our first civilized port since our arrival in Cuba. Port authority did not only search us but also a little sniffing dog. When the dog jumped onto Jacks bed he almost went crazy and we had to take him into the back cabin. Just outside the marina there is a turtle farm, which is where I spent most of my time after school. Octavio, the man who runs the turtle farm, became my friend and I even ran it when he went out fishing for the day with his friends.

There are six tanks containing different types of turtles. The first and second biggest tank belonged to a female Green Back Turtle, the shell about 1.5 yards long. The other tanks belonged to two Rock Turtles which live up streams in fresh water, about a dozen newly hatched Green Backs, one albino was in a separate tank to prevent it from getting any diseases, for albinos are very weak.

Two teenaged green turtles, brother and sister, lived in another tank the last right in the middle of the park the biggest tank of all, belonging to a family of Hawks Bill Turtles. Hawks Bill Turtles eat upside down jellyfish, the way they eat is the funniest sight ever. They swim down to the bottom of the tank which is were the jelly fish go, and they sit down on their back flippers and wait for the jelly fish to float by. They then take a triangular bite of the jellyfish and start chewing while the jellyfish swims away like apple pie with a triangular slice cut out.

We were on our windy way to Cienfuegos from Cayo Largo on the 23 December when we heard a Pan-Pan, which is an emergency call that boats use on the VHF. The sailboat Lhamy was unable to maneuver, 3 miles off the barren and windswept island of Cayo Guano. The lighthouse on the island looks like it had been designed by Tin-Tin. Lhamy could not get to the little shelter that the island gave because their prop shaft had slid out and jammed the rudder. After several dangerous attempts to rescue them we finally got a line to them and towed them behind the island where there was a bit more shelter. Dad helped them work on their boat for five days, before their boat was seaworthy again.

Yes four days which meant we had to spend Christmas locked inside the boat getting banged around, not even the one hatch could be opened for the spray hitting the nose of the boat fifty foot away wet the cockpit and the back of the boat, it was miserable. We finally left on the 27th December for Cienfuegos, hoping to make it there for New Year. 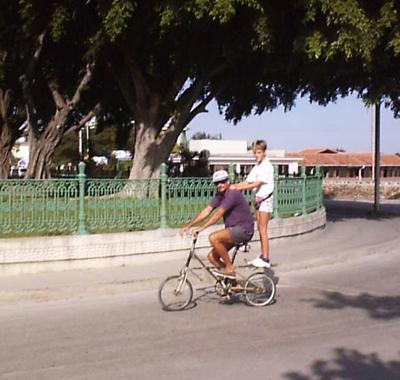 In, around, down, pull- I tightened the bowline and threw it with all the strength I could muster, thud it landed on the dock and Norm quickly slipped it over a rusty thing I guessed was a cleat. Dad tightened the rope on the winch and Gilana slowly moved closer to the dock. I swung my legs over the guardrail, my bare feet hitting the concrete with a loud slap.

I had a look around, so this is Cienfuegos. Just outside the marina there is a little field on which goats graze. I made friends with these animals and by the end of the week most of them had names. Mrs. Manana is the name I gave a lady, working in a little shack selling fruit and vegetables. I call her Mrs. Manana because whenever I ask her when will she get some produce she always says manana and thereby earned her name. Manana, meaning tomorrow in Spanish.

When she does get food, she gets it in bundles, one whole stockroom is filled with oranges, being the most plentiful fruit. In my opinion the price is right, 8 oranges for one peso, or 160 for one US dollar. Slightly cheaper then the local super market wouldn't you say? A string of garlic two yards long costs an unbelievable price of 1 dollar, the list goes on. Dad assembled our foldable bicycle and I soon took to the streets. In the middle of a traffic island at the end of the road there is a bronze women, this figure inspired me to write a poem, "The Bronze Lady".

We were gliding along the wind on our beam and fairly calm seas. When in the space of 30 minutes the wind had dropped to a slight breeze and we saw the sails hung lifeless as Gilana gently dipped her nose into the rolling sea. We started the motor and slowly putted towards the little bay of Yaguanabo.

Anchoring was difficult for the seabed was as smooth as a billiard table and the anchor just wouldn't hold. We dragged for about a hundred feet before the anchor hooked in a little canyon that ran across the seabed. As we were settling down a little rowboat came along side with the customs official. He was carrying a briefcase, which contained one sheet of paper, one pencil and a gun. As the customs man clambered onboard he passed dad his briefcase and gun so he could use both hands to climb abroad, isn't that something.

After a slightly rocky night we woke up had breakfast and lifted anchor. The water was like a mirror and there was no wind. We drifted with the current for a few miles, it turned out those few miles were more exciting then you could imagine. Half an hour past when we saw a fin slicing the water.

As it came closer we realized it wasn't a fin but rather the sail of a sailfish. We didn't have time to get the camera for it was gone in a flash. We were disappointed when the sailfish left but we were yet to realize that the sailfish was the beginning of an ever-greater treat...

Dolphins on the port bow I shouted, pointing to a group of what I thought then were dolphins. As dad turned the wheel and the current carried us towards the activity we realized they were actually a pod of Pilot Whales, swimming next to the bow. I hurriedly took some photos but after realizing they wouldn't come out that well I spent the rest of the time just watching them.

The sun was setting as dusk drew near, I thought that all the things I could wish to see I had seen today. When all of a sudden I saw an Orca spy hopping against the sunset, one, two, three they started coming up from nowhere a whole pod spy hopping next to the boat, you couldn't have hoped for more.

We arrived at Cayo Blanco as the sun disappeared beneath the horizon. After breakfast the next morning we geared up and went snorkeling on one of the many coral heads that surrounded the boat. I tried spear fishing a bit but the game fish were not very large and I don't believe in killing what we can't eat.
The island is mainly rock, sand and a bit of scrub here and there. A bar stands on the beach, it is only open over the weekend when the tourists get shuttled over from the mainland. I spent my 12th birthday here and enjoyed the day finding shells and snorkeling. Two days after my birthday on the 18th of January we left the White Cayo for Cayo Breton a few miles away. 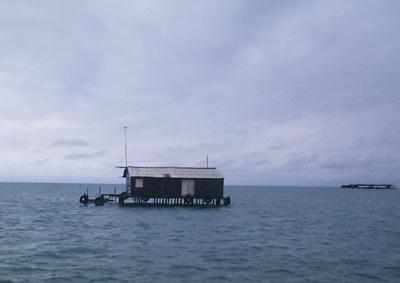 A line a bump, a line a bump these were my first impressions of Cayo Breton.

As we edged closer fishing stations materialized from the bumps. Boards on stilts driven into the mud by rocks are the not so steady building blocks holding the hut above. This odd triangular structure has a few chairs inside and a TV. When sundown comes a gathering of little fishing boats tie up to this odd mass and when the sun disappears you see the faces of a few fishermen flickering in the TV light. The water was so flat that evening that when I took a picture of the sunset you couldn't tell the difference between sea and sky.