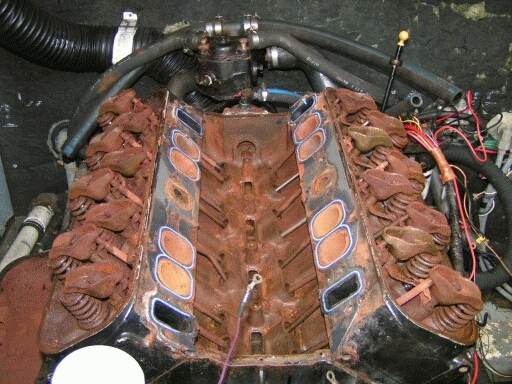 Winter is also the time for maintenance. Please don't be shocked, this is not our engine, but that of our neighbour on the dock. We became friends and when we discovered that his engines had filled with water we offered to help by rebuilding both of them. Here is what we found upon opening them. 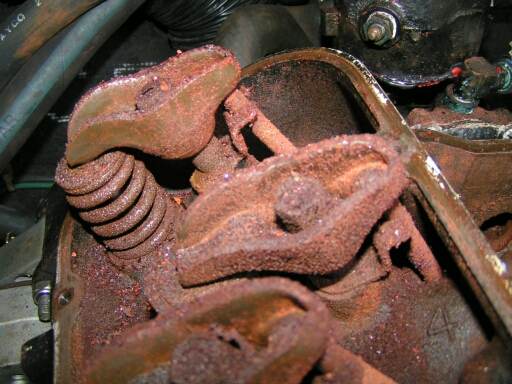 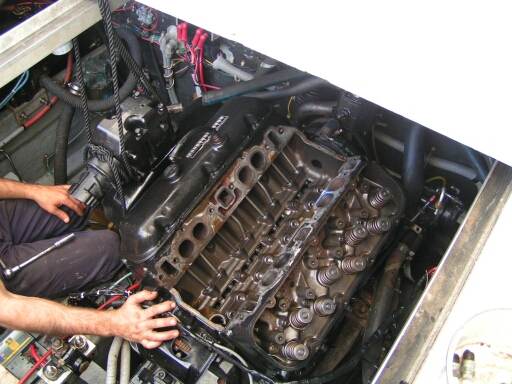 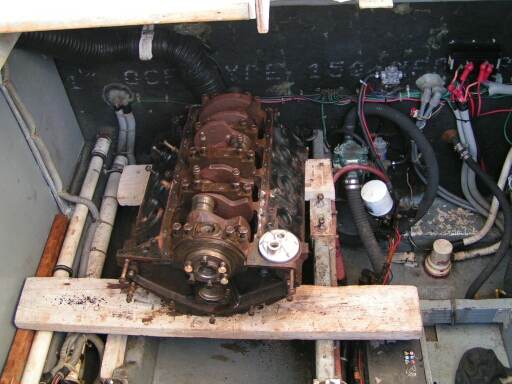 Just about to pull the crankshaft out. 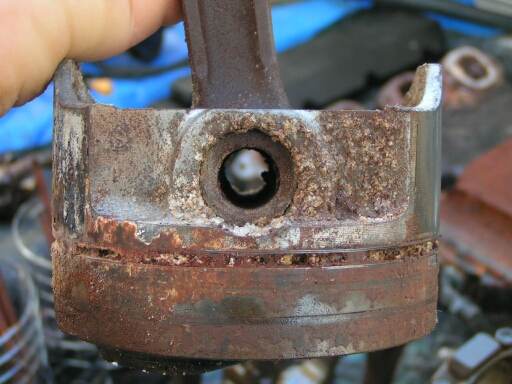 One of the Pistons, the engine obviously was seized solid. Used Coca-Cola to clean them before fitting new rings. 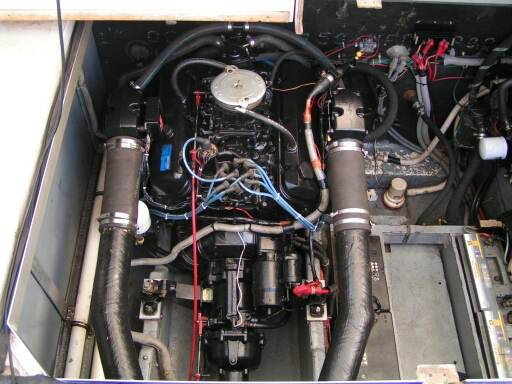 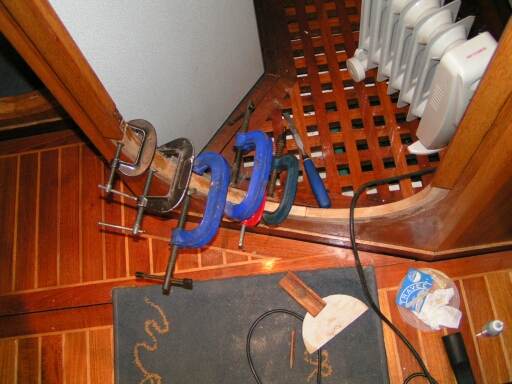 Back on Gilana some joinery work had to be done, here we are replacing a water stained oak door frame. Note the heater, nothing to do with the epoxy glue, just that it was cold! 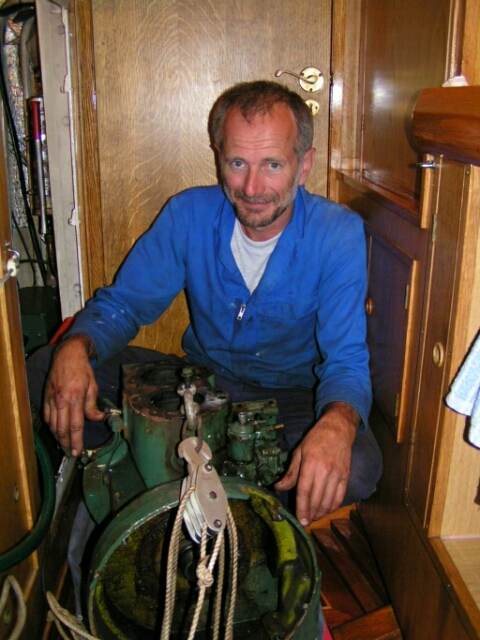 OK this is me in winter-workshop mode. Let me explain about our dear generator. Last winter we put what was effectively a new head onto the genset, then in Turkey last summer, the rings blew, probably because of the renewed vitality of the engine due to the new cylinder head. We were using a litre of oil per hour, and I had to devise an oil recovery system to recycle it through the crankcase breather. Upon return to Mallorca we started looking for a new generator, ours after some 25000 hours needed some serious work. A set of piston rings cost about 700 Euros here, and that might not have been all that was needed. The picture above shows me, after just having removed the last component (we stripped it in situ) from the engine room. 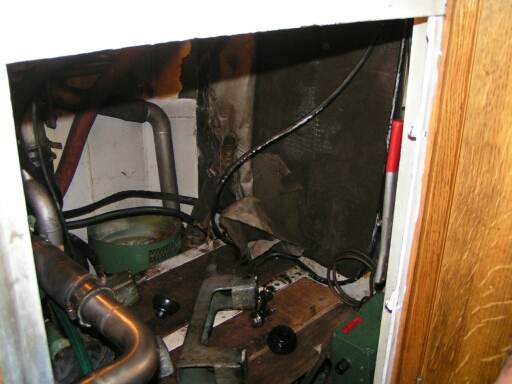 This is the place occupied by the genset. We noted that the soundproofing behind the genset and all over the engine room was in very bad condition. 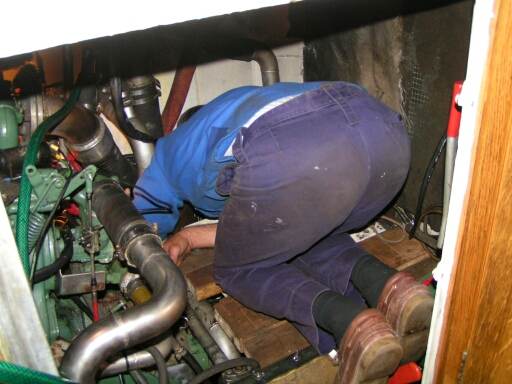 It also was an opportunity to remove and inspect the generator exhaust system, here I remove the silencer. 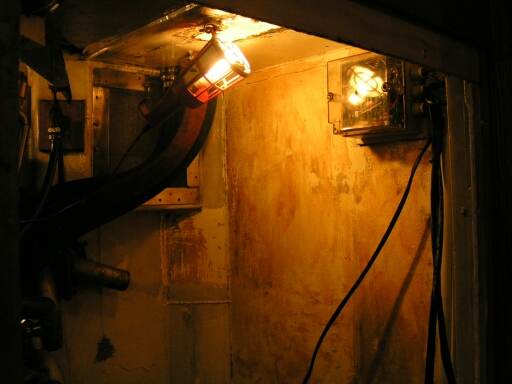 We then totally removed all of the old soundproofing. 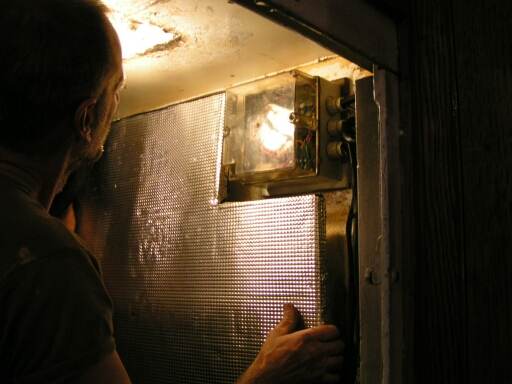 ...and fitted new in its place. 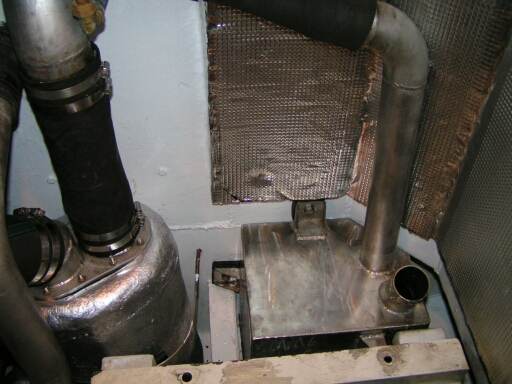 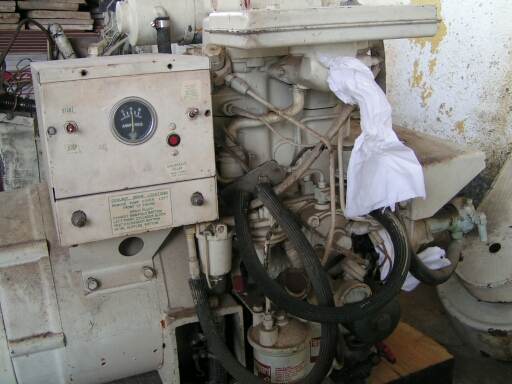 ...our dear friend Tony, telephoned to say he had found the exact same model as ours in Palma, and would I like to go and see it. I had a very close look and found that although the electrical portion was indeed older than ours, the actual engine had only done 300 hours Max! The engine would fit into our existing location with no plumbing alterations at all! 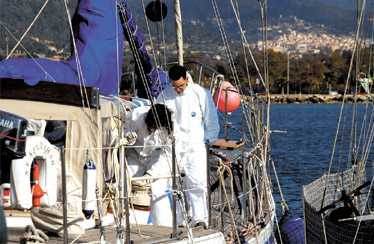 Well while I was taking that photo, Laura phoned me to tell me to return to Gilana because she had, with Brett, just found our other neighbour had been murdered, and the police etc. were on their way to the dock. Here the forensic pathologists take evidence samples. The case is not closed yet so any comment on the murder would be pure speculation, BUT the facts are, Gert was killed by a blow to the head, his neck was then almost severed. His girlfriend attempted suicide by slitting her wrists but Laura found her in time to call the paramedics and prevent her dying. She is under arrest. 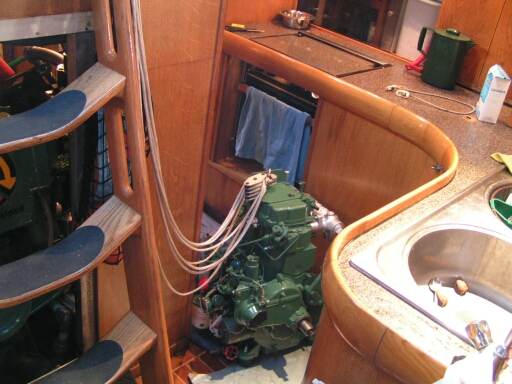 So we bought it and cleaned it up, fitting new hoses, belts, impellers, seals etc and here it is on its way to being installed. We could have taken the old one out and fitted the new one in, completely assembled, but that needs the cockpit floor to be raised, a complication when living aboard, so we opted for the "strip-and-rebuild-in-situ" method. 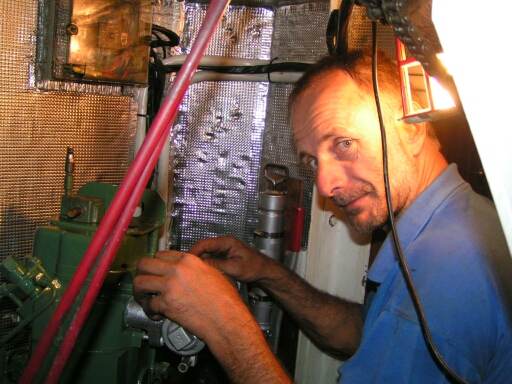 Adding a tee in the cooling jacket to take a temperature sender. We also installed remote oil pressure and water temp guages for the generator. 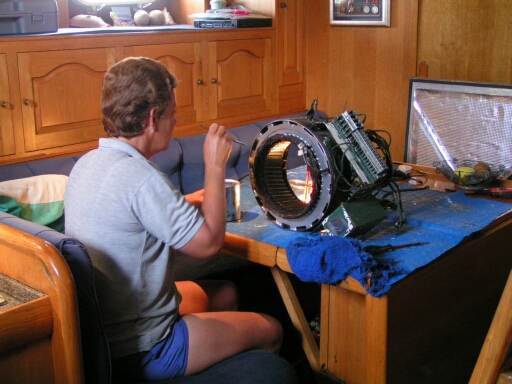 Here Laura brushes on high temperature aluminum paint to the stator stack. (note the new soundproofing on the engine room access panel in the background) 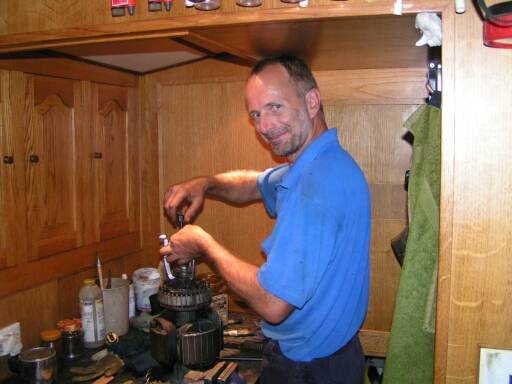 ...while I pull off the old rotor end bearing. 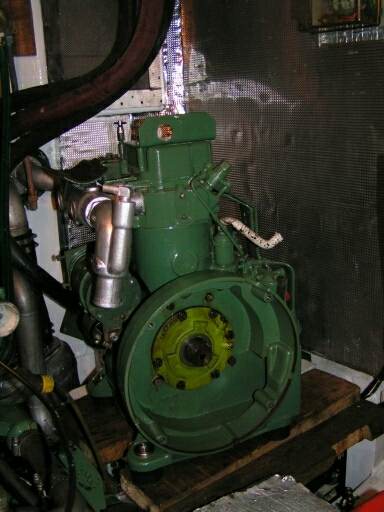 Here the completed engine portion of the genset waits for the rotor to be offered into the crankshaft.... 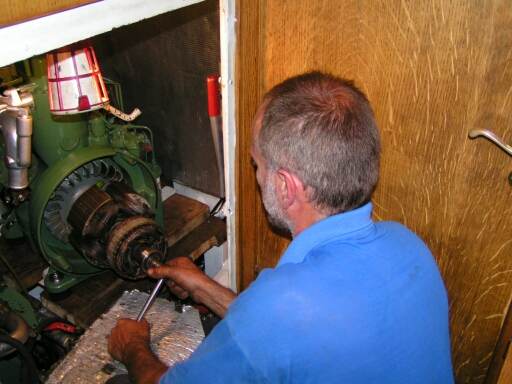 which I duly provided. 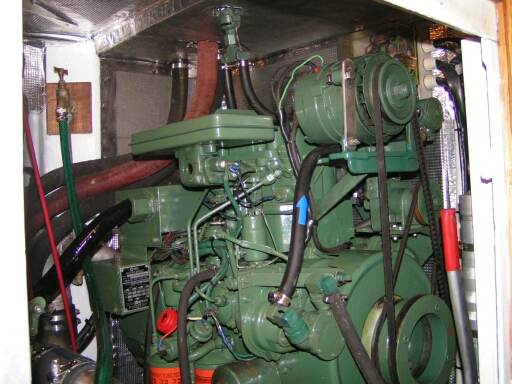 And there it is! a brand new (well almost!) marine genset! 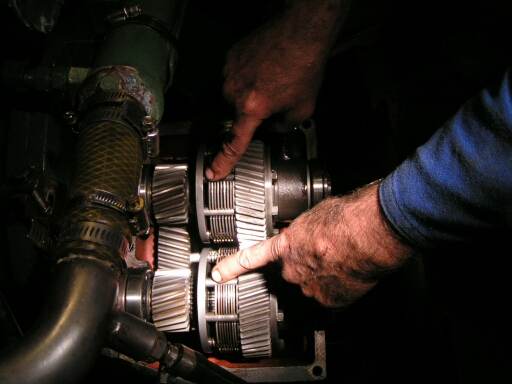 The other big job this winter was to replace the clutches in the gearbox. We had encountered unusually warm waters in the Ionian Sea last summer, this had resulted in the gearbox getting a tad hot. It had melted the adhesive used to glue the friction material onto the clutchplates in the gearbox. As we had "Ahead" engaged at the time, the melting glue did not matter to the "Ahead" clutch, but the "Astern" clutch was relaxed, allowing the friction material to slip off. Here you can clearly see the difference in stack length. That is why we had no reverse gear on our way back from Italy last year. 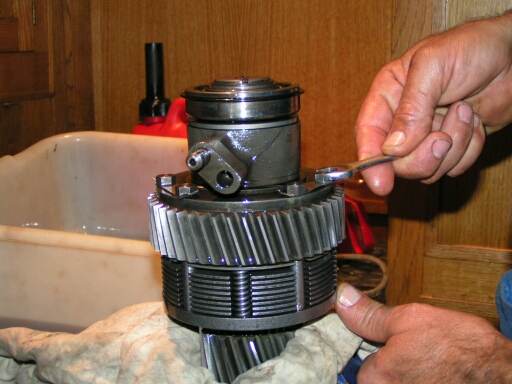 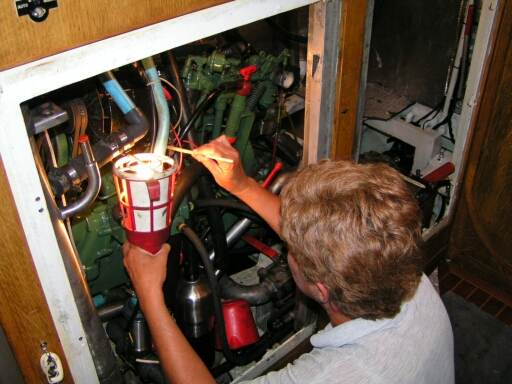 Laura touching up the engine painting. 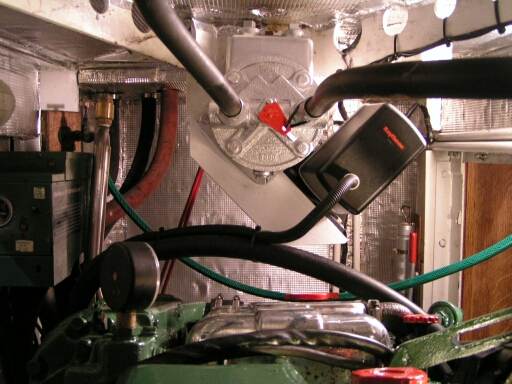 Autopilot and steering drive detail in the newly repainted resoundproofed engine room, viewed from the saloon. 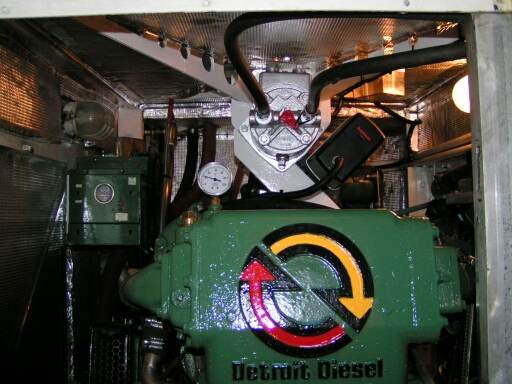 The trusty Detroit, with every hose and hoseclamp renewed. We also removed the engine waste heat recovery system to simplify matters. 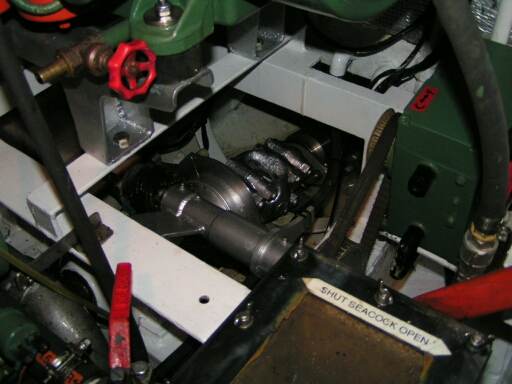 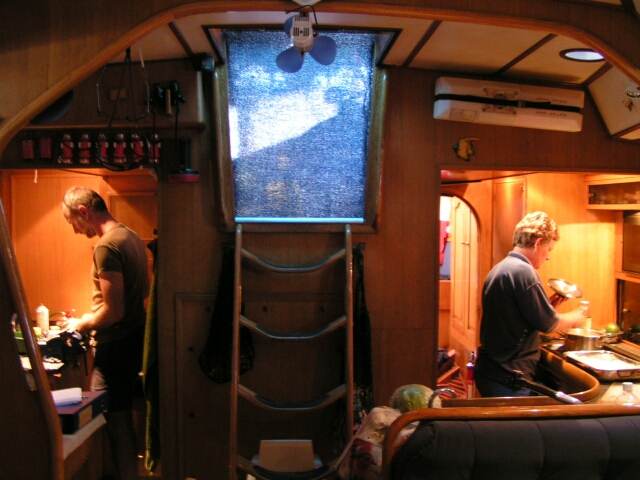 This shot taken by Kayleigh, shows Laura and I playing in our respective sandpits. 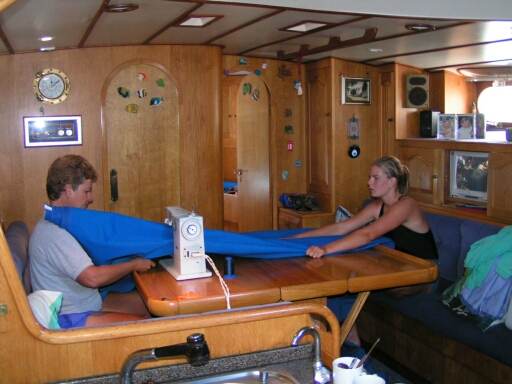 We also made a new stack and pack sail cover for our new fully battened mainsail. Here Liz helps draw the fabric through the machine.