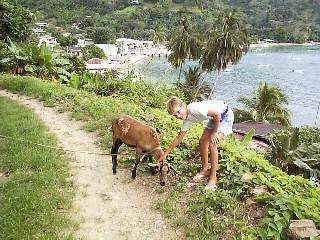 It was a short but hard beat to the Tobago Cays, but once we arrived there WOW!!!

The Tobago Cays are a group of three islands, none of which near Tobago, go figure. The snorkeling visibility is 100ft plus and the fish around you appear to be flying.
Diving down to about 30 feet, you settle next to a nurse shark. She slides back a weary eyelid totally unperturbed by the newcomer, then disappears over a coral head with a flick of her tail. Looking up at the people swimming on the surface is scary, the water is so clear it looks like they are hanging in mid air and are about to fall on you.

You release a little bit of air out of your mouth, and watch the bubbles hurry to the surface. Sea fans flow in the current like willow leaves in a gentle breeze, as fish fly between them. The distant "duk-duk" of parrotfish eating finger coral will stay in my memory forever.

In the shallows between coral heads we dive down to about ten feet and closely watch the little gobies popping in and out of their little holes. A couple of our old friends were also here, Cacalo and Geraldine on Haaviti, we met them in Salvador about a year previously.
It was them who taught us to use toothpaste as an antifogging aid in our diving masks. I always wondered why their masks smelled like peppermint.

We then left the Tobago Cays for Tobago.

The sail down was beautiful, one of our best ever. We caught about fourteen Skip Jack Tuna, we only kept the big ones. We came to be familiar with a trick we learnt in Brazil. Instead of hitting the fish over the head with a winch handle, we keep a little spray bottle filled with rum. The rum is sprayed into the gills, putting the fish into a deep sleep. The fish also tastes better, if you hit it over the head with a tool, adrenaline or something similar gets pumped through the fishes body making the meat taste awful.

We arrived in Store Bay early afternoon. The water was not clear and there were many boats for the annual Yachting World Regatta, a huge party! When we dropped anchor and were settled down Nicolas(Khayamanzi) and I went over to another boat called Island Fling, which apparently had a child on it. Being a cruiser you make friends very easily and soon Lee-Ann became my best girl friend while sailing. That night there was a party ashore with music, food and drinks.

There is a huge hotel next to the marina and beach. The hotel beach has white, white sand and the real beach has sand of an off beige. The sand in the hotel is imported from places like Sandy Island.

We left Store Bay after a few days and headed for Charlotteville, Man o' War Bay with Khayamanzi. Man o' War Bay is surrounded by mountains, where Banana, Cocoa and Breadfruit trees grow. The road to the town is a narrow steep windy track and walking to the town is not as easy as it seems for on the way you have to pass goats and sleeping bulls, both tied to LONG ropes. The bulls seem to like sleeping in the middle of the road and getting around them is not easy. The locals make a joke saying beware of the "Bull Dozers".

Pirates Bay, the small beach closest to where we were anchored has a little fresh water stream running down the mountainside, you can drink this water only after you add a few teaspoons of Chlorox. This water is however fine to wash clothes in and to shower.

On the other side of the bay there is a thick bamboo forest, the ground is boggy and slippery. And almost naturally you stop talking, you feel like you are in a holy place. The wind whispers and moans through the bamboo. The distant "thock, thock" of machetes rings through the sleeping forest, but even this sound seems natural among the bamboo. It's almost like the forest wouldn't be complete without it.

Leaving Tobago, we headed down to Trinidad, once again.