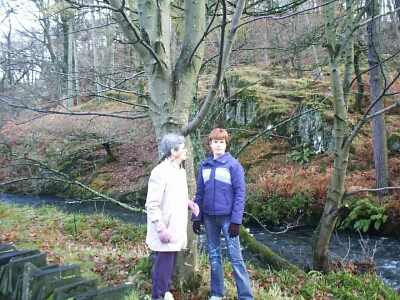 Few towns in Britain can claim to have been inhabited without break since Pre Roman times, but Caernarfon is just such a town.

Dominated by King Edward 1st' medieval fortress, built to secure his foothold in Wales after the death of the last Prince of Wales, Caernarfon's Royal connections go from ancient Celtic chieftains to the present day; with the investiture in 1969 of Prince Charles as the present Prince of Wales.

Seeing my grandmother again was lovely, although I was amazed to see how much she had changed in the few months since being off the boat. For the last four years she had been with me every minute of every day. True, we were often at each other throats and couldn't sit next to one another in the back of the car without starting a miniature war, one I would usually foot the blame for.

Now, here I am standing in front of her, the person who, when I was little I would tell my deepest secrets to, and she doesn't know who I am.

The sadness I felt at not being recognised left me in a bit of a panic and I was worried that she would not recognise my mom, which I know would break her heart. Senile dementure is very very sad.

Thankfully as soon as she saw mom granny started crying and saying moms name and asking her where she had been, which was a relief so great you can't imagine.

While in Caernarfon we went everywhere with granny wanting to spend as much time with her as possible. We went shopping for new clothes, toiletries and of course her all time favourite chocolates and biscuits.

On one of the days we caught a bus up to the Snowdonia slate quarry and spent a few hours walking around the town and visiting the local museum which, as part of its exhibit had four life size quarrymen's houses, each from a different period in time. It was amazing to see how these people lived in such confined spaces, and that's saying something as having lived on a boat for some time, confined spaces are a way of life.

Naturally Granny was upset when we left, and tears flowed freely on both sides. With the promise that we would call and would be back to visit soon we rounded the corner and Willow Hall was lost from sight.

A few days was spent with my moms cousins, I had great fun getting myself completely confused by trying to figure out how we were all related to one another. Henry for example who is the second youngest in the family, me being the youngest, is my second cousin twice removed on my mother's side.

We enjoyed the few days that we spent with our cousins although as I told them, four days every eight years isn't often enough as I am sure you will agree.

When we were dropped off at the airport with promises that we would visit again soon, although I don't think they believed us.

The flight back was two and a half hours and went by very quickly, although I guess that is because we are used to taking forever to get somewhere.