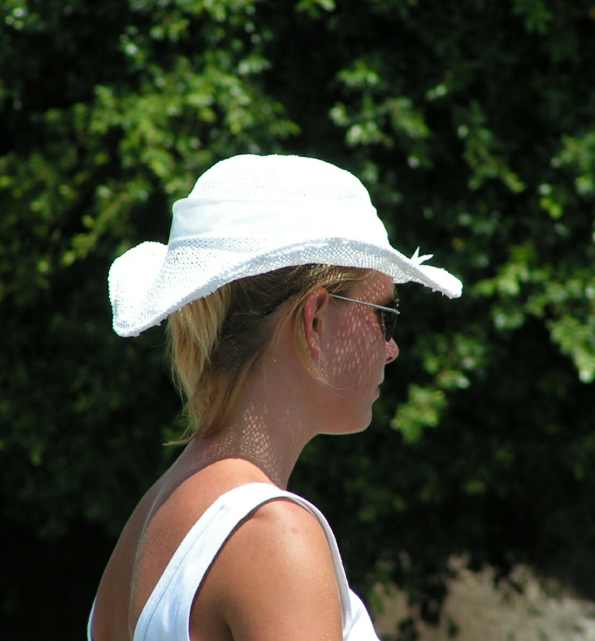 During our stay in Siracusa the Festa del Mar was in progress. Days were spent watching numerous activities including a Triathlon, which had to be shortened to a Biathlon due to the sighting of a shark from a passing news helicopter.

At night the dock was alive with people listening to music from live bands and watching the occasional dancing competition or ballet show. The fruit and vegetable market was the same as before and very soon we had befriended a lot of store holders going to each for certain products. At the bakery van, for example we would have the bread we bought already in a bag and waiting by the time we were served. One of the best travelling tips I have ever heard is 'Do what the locals do', and it's so true.

Although I still don't stand up for myself when someone pushes in front of me looking back I think a guilt trip is a lot worse than being stopped while pushing in. They know they pushed in, they know I know they pushed in, and yet I say nothing? I get great pleasure in seeing the confused look on the persons face as they walk away, hopefully thinking to themselves, 'What an idiot I was, pushing in front of a child'.

I think I can rightly say that, during our stay in Siracusa I wore off a good half inch of my Rollerblade wheels. Although I have mastered the art of going both backwards and forwards I still haven't I clue how to stop, which was rather a worry as most of Siracusa is built up, as it is situated on a bit of a slope, get it 'Built UP', ahh never mind.

I conquered my fear of going down hills on roller blades by mastering the art of dodging moving vehicles and smashing into soft looking inanimate objects.

I went everywhere on my Rollar blades, I even learnt how to cross the passerelle onto the boat with my Rollerblades, but I still can't stop, go figure!

We made lots of friends in Siracusa and when we hoisted sails and glided over the horizon we promised ourselves that one-day we would return.

My mom should be writing the following passage as she was the person who most enjoyed sailing past Mount Etna.

As some of you might know from sailing in the Med, the visibility is very bad due to the high amount of pollution coming from the main industrial countries. Etna loomed in the distance and although she was two miles away we could hear the rumbling. Sailing through the straits of Messina we could see both the northeastern tip of Sicily and the southwestern tip of Italy's boot.

That night we anchored on the northern tip of Sicily on a sand band surrounding the village of Secca Rasocolmo. 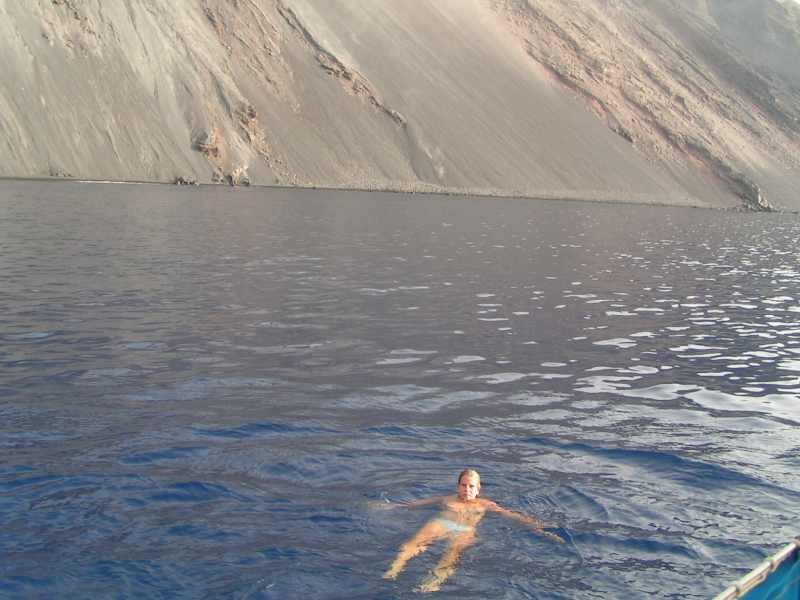 Flat seas and no wind saw us motoring around the island of Stromboli gasping in awe as a jet of smoke shot out of the crater every thirty minutes followed by a huge boulder that would bounce down the mountainside, a bigger version of Flubber landing in the water with a huge splash just audible above the hissing sound as the rock suddenly cooled. Not wanting to miss the opportunity I asked dad if it would be possible to wrap the old Genoa sheet around the secondary cockpit winch, trailing the rest of the twenty-foot of line in the water. When all of this was sorted I took a deep breath and jumped off the nose of the boat into the water.

Due to all the volcanic activity I was not surprised to find the temperature of the water well above thirty degrees Celsius. We were amazed to find that the island of Stromboli had lush, equatorial type vegetation in the south, while the northern tip resembled an almost lunar landscape, any vegetation that might have thrived wiped out by streaming lava.

The inhabitants of this island are a perfect example of Darwin's theory of evolution and natural selection as they have not evolved much and still have a Neanderthal type skeletal structure giving them a shocking resemblance to the Gorillas of equatorial Africa.

That night we anchored in Lipari and left early the following morning for the island of Volcano. 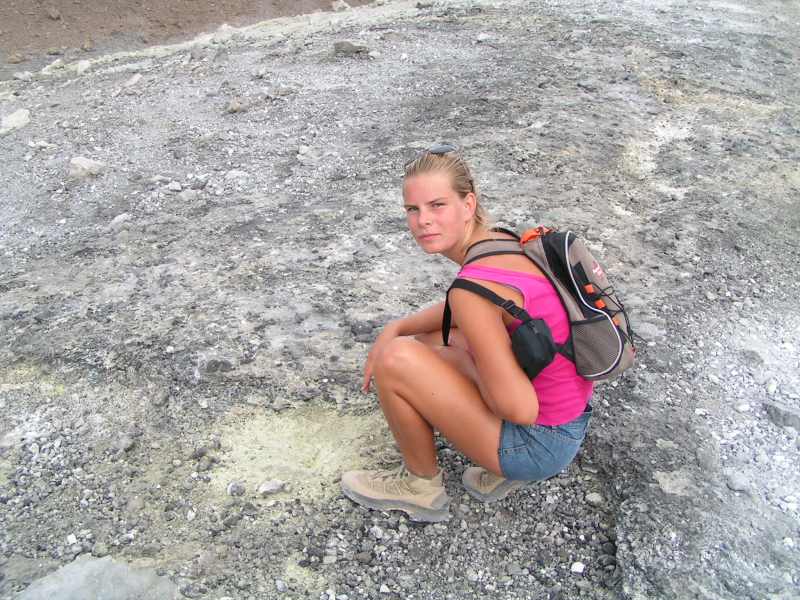 The hike up the islands volcano was very tiresome but when we finally emerged over the lip of the volcano we gazed across the creator at the miles of sea surrounding us dotted with the other two Aeolian Islands. The smell of sulphur was suffocating as we picked our way around the pools of what looked like brackish water but was in fact sulphur that was so hot it was present in its liquid state and bubbling viciously. As the terrain steepend our breathing deepened and we soon felt dizzy with the overpowering chemicals that were being emitted from the bubbling sulphur pools. Not only did the fumes burn the inside of our lungs but soon my skin became itchy from the intense heat from the steam.

Tired from our hike and still another hour down to the base of the volcano we decided to run down the side of the mountain. This surprised me immensely as my mom is not normally one to make rash decisions. The gently sloping other side of the volcano allowed for an easy descent without too much trouble concerning the dodging of odd trees and saucer eyed tourists.

Although the temperature was close to forty degrees Celsius where we were anchored one could not stay in the water for more than and hour as the water is extremely acidic and serious pain is inflicted on any open wounds.

As we rounded the island of volcano we could see the island of Stromboli in the distance. Seated at the front of the boat I had great pleasure gazing into the depths of the sea my toes occasionally dipping into the warm water as I lazily watched pumice stones float through my line of sight and slipping over the horizon. 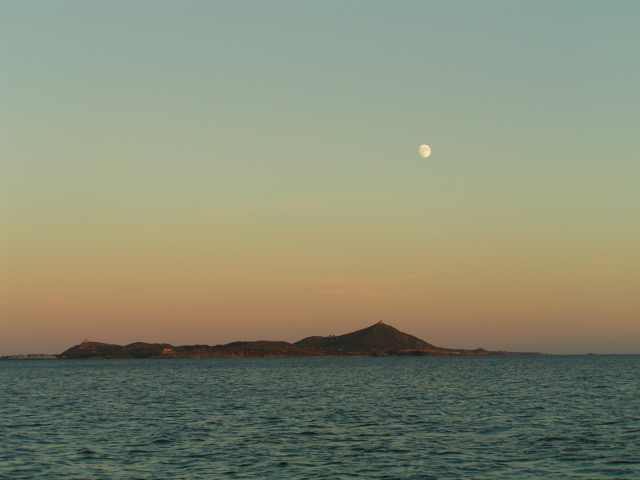 I found that, after the heat of Turkey and Greece my image of what was once a good day had changed, now anything below thirty degrees was considered cold and anything that remotely resembled a cloud made that day overcast. We were surrounded by sand and sea grass and the only occupants on the bed below were a few octopi. Their homes dug deep in the sand and supported by odd stones and numerous shells.

On our second day anchored at Colonia Stella Maris Jack decided that I needed to stretch my legs and you know what they say 'When they gotta go, we gotta go!' Our walk consisted of me 'piggy backing' Jack a hundred or so meters through a twisting maze of bushes that had barred the way to any canines deprived of shoes due to the amount of thorns. When we were finally on the open road I could put Jack down and we continued OUR walk instead of just MY walk, to the next bay.

I couldn't tell you much about this bay as we only spent the night and I stayed on the boat and made supper while mom and dad took Jack ashore. I could ask mom or dad what the place was like but I am afraid you wouldn't be interested and besides this is MY story, MINE, MINE, MINE, MINE, MINE! (Apologies to the sea gulls in 'Finding Nemo'.)

Mom was left to circle the boat around the harbour while dad got in the dinghy and went to another boat to find out what was happening as far as anchoring or tying alongside was concerned. As mom and I looked around the small town we both agreed that this was a picture perfect place and we both couldn't wait to get ashore. We ended up tying up at the public dock, which is (was) free to all mariners with a maximum stay of three days. Due to certain port fees 20 euros had to be paid to the port authorities which is located at the far right end of the waterfront road and has an array of flags hanging on poles from the second story. The reason I am including this in my writing is that, although some of the locals live within meters of the building they are oblivious to its existence.

The entire 'Passio Maritimo' or waterfront road is paved with both shops and smooth tiles, making it a roller bladers paradise

Chandler and I hired a scooter and had a fun day out visiting the surrounding villages and seeing some of the sights. I took some lovely pictures of our outing but unfortunately the Casio decided to have a bit of a hissy fit and I am afraid the pictures have a purple tinge.

We left Carloforte on the 2 September at about 6 o'clock, or at least that's what mom told me as there was no way in hell I was going to wake up THAT early!